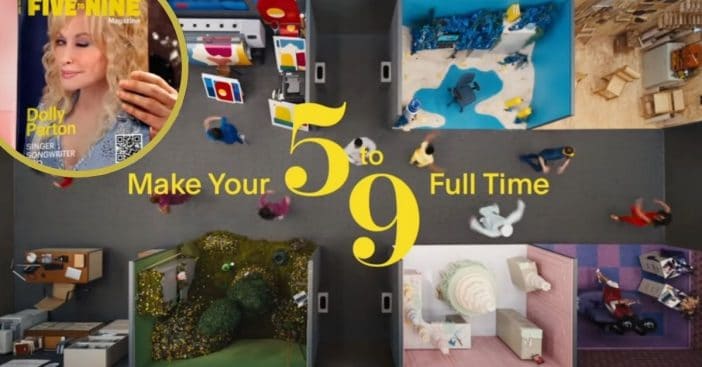 During the Super Bowl of 2021, played earlier in February, Dolly Parton aired an ad with Squarespace. It featured an updated rendition of her “9 to 5,” changed to reflect extended working hours of “5 to 9.” An NBC opinion article criticized the message this ad may send. That criticism, in turn, was slammed.

The original opinion piece compares the two Dolly Parton songs and juxtaposes their delivery. The original, the piece claims, called out the exploitation of workers and acted as an anthem for the weary and rundown. This updated one, the author argues, treats the extended working hours as cause for joy and celebration and erases all exhaustion it causes.

Opinion | Kim Kelly: As much as we all love Dolly Parton, it’s still disappointing to hear her literally sing the praises of “working, working, working.” https://t.co/RjA0CzdpmT – @NBCNewsTHINK

Kim Kelly is described as a freelance journalist and organizer with the Peacock Network. She penned an opinion piece dissecting and criticizing Dolly Parton’s 2021 Super Bowl ad with Squarespace. It’s headed, “Dolly Parton’s 2021 Super Bowl commercial is playing a rich man’s game.” Parton’s “5 to 9” is a twist on her original “9 to 5,” which detailed the daily grind faced by workers of the 1980s. Jump to 2021, Squarespace is a website-building tool that allows budding entrepreneurs of any skill level to create a stylish domain to host their business dreams.

Kelly calls “5 to 9” a “tone-deaf misstep” that celebrates the same exhaustive daily grind that the original called out. All in all, she deemed it a “perfect storm of gig economy propaganda.” Essentially, she feels this new, celebratory ad erases just how exhausted workers get not just from regular hours but from the new, extended hours they need to make ends meet and try and indulge in what’s called a side hustle. This can include just about any passion project that a person might want to turn into a career instead of a cubicle job unrelated to any of their passions.

The commercial showcases some examples, with the main protagonist rising from the monotony of her office desk to let color bloom into her life. All this is possible when she starts a fitness website. Kelly opines the new lyrics and accompanying video demand workers feel only joyful and invigorated to work their regular day job then also expend energy to build a business of their own from the ground up.

Fans react and offer a rebuttal

Now I know it’s disappointing to try to earn a living by following your passion! Thank you, NBC News!

Many official accounts now have disapproving replies linked to Kelly’s opinion piece. They reference her own position in the gig economy, which embraces contract roles from individuals often working as freelancers. Reactions feel that Kelly missed what the one-minute-eight-second video wanted to convey. “Now I know it’s disappointing to try to earn a living by following your passion!” Dan Federeico wrote. “What a bad take,” added Briana Sharp. “The protagonist of the commercial isn’t energized by her job, so like many, she starts one on the side. If you watch the full version on YouTube, you see she quits her job in favor of her business. Heaven forbid she make a go at her dream. Wrong take Ms. Kelly.”

Robert Chidgey noted, “The commercial was about entrepreneurship. It was people (who clearly were not loving their day jobs) trying to make a business out of something they have a passion for. The unseen part two is where they quit their day job.” Emma Meshell Phillips pointed to Parton’s own upbringing and how the singer embodies firsthand the trials and rewards of hard work. She writes, “Dolly Parton was raised by sharecroppers in a one-room cabin with 11 siblings. Now she’s the queen of country music and an international icon. If you feel “betrayed” by her promotion of hard work, you’ve got bigger problems than super bowl ads.”