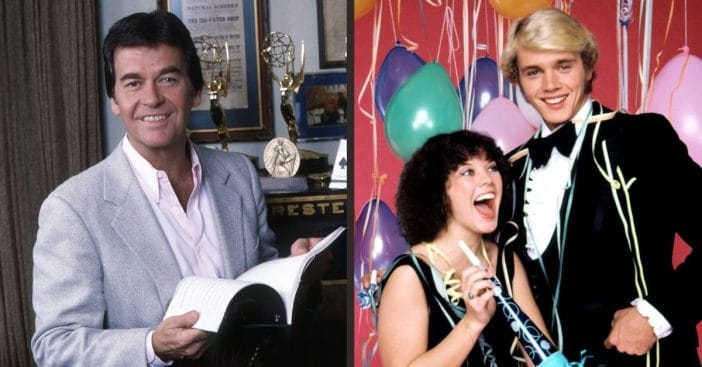 New Year’s Rockin’ Eve has been a yearly tradition for people in New York’s Times Square and people tuning in from home each New Year’s Eve. Many people associate the celebration with Dick Clark, even though he’s not the only host there has been, and he’s not the first either. The celebration actually dates back as early as the 1950s, and with that being said, we figured we’d take a walk down memory lane and check out the hosts from New Year’s past.

Do you remember any of these incredible and memorable hosts? Let us know in the comments if you do!

Lombardo along with his band the Royal Canadians, kicked off the evening on December 31st, 1956. Even in the mid-’50s, he was still the traditional host as he had been hosting it 27 years before that on the radio. The TV broadcast would normally take place at the Waldorf Astoria Hotel in New York and it’s because of Lombardo that we typically sing and associate “Auld Lang Syne” with New Year’s.

Grauer was a US radio and TV personality and was the go-to guy for NBC’s coverage of the annual celebration in Times Square. Between the years 1951 and 1969, he covered the event 11 times, and in 1976, he would begin hosting alongside Lombardo.

By this point, Dick Clark felt that there needed to be more appeal to the younger audience, and had Three Dog Night host the event on December 31st, 1972 instead of the traditional Lombardo. Dick Clark was present when the ball dropped that night, but the camera quickly cut away to the band performing at Queen Mary in LA and ringing in the New Year!

Comedian George Carlin was the host to ring in 1974. The Pointer Sisters, Billy Preston, Linda Ronstadt, and Tower of Power were performers for the evening and these first two years of Rockin’ Eve took place on NBC before moving to ABC.

Of course, we had to include the man himself. Even though we all associate Rockin’ Eve with Clark, it actually took him quite away to lure the popularity away from Lombardo as he was the traditional guy for the most part. When Lombardo passed in 1977, it was an opportunity for Clark to overtake the ratings, and he sure did. He would go on to host the special until 2006 and would have guests occasionally step in to assist. Like these two…

Although Moran and Schneider were from two separate TV worlds, they paired well together for that year’s Rockin’ Eve. The duo celebrated coming into the 1980s with Blondie, Chic, The Village People, and many more memorable acts.

One of my personal favorites, Williams hosted the special Happy New Year, America, which ran from 1979 to 1995 on CBS. Gladys Knight, Donny Osmond, and Paul Anka also frequented the special.

Which hosts do you remember? Check out some footage of a New Year’s Rockin’ Eve past broadcast for 1985 into 1986 with the legendary Dick Clark.