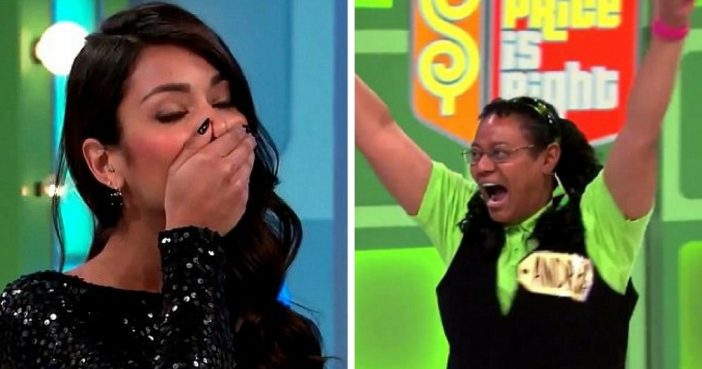 The ‘Price is Right’ model who gave away a $21,960 car for free because of dumb mistake has said it’s the ‘biggest mistake ever in game show history’ and the first of her six-year career.

Colombian-born Manuela Arbelaez’s mind was clearly somewhere else when she removed the wrong price tag during Thursday’s show – giving contestant Andrea the prize even though she guessed the wrong price.

The model and host Drew Carey both gasped after she revealed the true price of the Hyundai Sonata SE before Andrea had finished guessing.

A contestant on The Price is Right has walked away with a $21,960 car for free courtesy of a dumb mistake by model Manuela Arbelaez – who has since said it was the ‘biggest mistake ever in game show history’.

Speaking to the New York Daily News, she described how after the blunder she broke down in tears and ‘wanted to go in a wormhole and disappear.’

Manuela Arbelaez’s mind was clearly somewhere else when she removed the wrong price tag during Thursday’s show. She admitted that her body moved quicker than her brain.

She added: ‘I knew there was no way to fix it. I went to this dark place, and I thought I’d get fired or it would be taken out of my paycheck.’

Producers, however, decided not to punish her and said there was nothing to worry about during the commercial break.

For those of you asking: the producers and @DrewFromTV couldn't have been more supportive and understanding. I'm not in trouble 🙂 phew!

She added that host Carey was ‘understanding and supportive’ and told her he thought it was the ‘funniest thing ever.’

”I’m not in trouble phew!’ she wrote on Twitter yesterday.

She noted that there have been many model mishaps over the show’s 43 seasons.

‘There was an occasion when a girl crashed a car into Door 3 and another gave away a trip to Disneyland,’ Arbelaez recalled. ‘There have been small things like that over the years, but I think my mistake was the most expensive in the history of the show.’

Last year @ManuelaArbelaez was a viral sensation but will her mistake help our trader win $20K? #LMAD #PriceIsRighthttps://t.co/rCSqf0nOdw

Page Page 1 of 2
Previous article: Start Saving Your Old Coffee Containers – Here Are 14 Ways To Reuse Them Around The House.
Next Post: Homeowner’s Driveway Crumbles Below Him, Revealing An Amazing Discovery