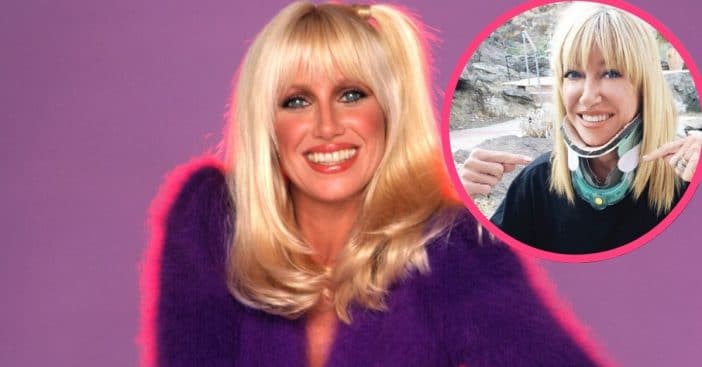 Suspicious landlords, deceptive tenants, hilarious slapstick, and many spinoffs. All this marks the legacy of the situational farce Three’s Company. It focused on a strong core cast, each with personalities and motivations of their own. One immense favorite ended up Chrissy Snow, played by Suzanne Somers. However, this fan-favorite didn’t stay through the whole show. So, what did Somers do after leaving Three’s Company?

Born on October 16, 1946, as Suzanne Marie Mahoney, Suzanne Somers did not come from an acting or entertainment background. Her mother worked as a medical secretary while her father maintained gardening and laboring work. Sadly, he also took to teasing her, habits perhaps exacerbated by his eventual alcoholism. Her first real entry into the public spotlight came through her looks. She became a prize model for Anniversary Games, which allowed her the chance to meet the host Alan Hamel. He would be her second husband and a very influential force in her life.

The birth of Chrissy Snow and a new media icon

Initially, Suzanne Somers built a career revolving around her looks and charisma. This saw her taking up roles of increasing importance, most notably as the femme fatale archetype in movies of the ’70s. She also promoted her personal literary work on talk shows, experience she would utilize decades later again. Fortunately, all this talk show exposure helped put her face and talents out there. While producing Three’s Company, producers didn’t quite approve of their first two Chrissy Snow candidates. Cue a sighting of Somers on The Tonight Show. Soon after, they brought her on board.

Quickly, Chrissy Snow lived up to her name and proved a real gift to the show and audiences. She became a major hit among viewers, to the point that Somers began to question her pay. She felt she should have equal or greater earnings than that of the main male star John Ritter. By the beginning of the fifth season, Somers wanted her salary to increase from $30,000 to $150,000 per episode. Reportedly, husband Alan Hamel helped guide this decision of hers. She took various measures of protest and appeared in less than a minute of each episode until finally she and Three’s Company parted ways.

What happened to Suzanne Somers?

This departure caused a rift between Somers and her former castmates. Three’s Company replaced Chrissy temporarily with Cindy Snow, Chrissy’s cousin. But Somers managed to move forward from that hiccup. Using her ’80s success as the spokesperson for Thigh Master, she propelled herself back into an everyday tv role, leading the show, She’s the Sheriff. After two mediocre seasons, she managed to hit it big with 1990’s Step By Step, co-starring with Dallas’ Patrick Duffy.

Now at 74 years of age, Somers managed to rebuild the bridges between herself and her former roommates from Apartment 201. This came thankfully before John Ritter sadly passed away. Through her online show Breaking Through, Somers also reconnected with former costar Joyce DeWitt. Outside of promoting her self-help books, biographies, diet manuals, and poetry, she does run into some trouble. While Chrissy Snow was a secretary, Somers sometimes promotes alternative cancer treatments that official organizations warn currently have no scientific backing.

Click for next Article
Previous article: WATCH: Kenny Rogers Holds His Own Against Michael Jordan In 1988 Game
Next Post: Jimmy Carter And Wife Of 74 Years Rosalynn Share New Year’s Kiss