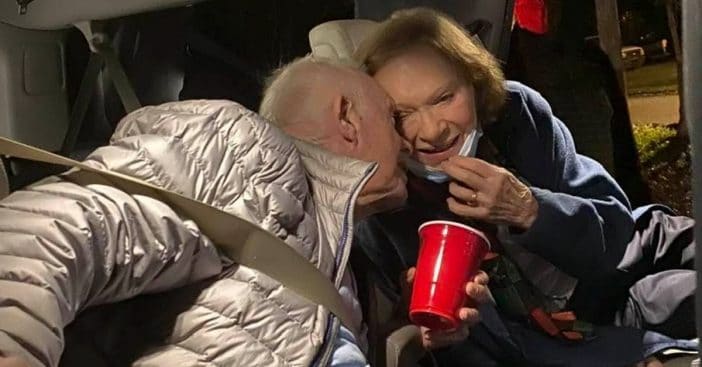 96-year-old Jimmy Carter and his wife of 74 years, 93-year-old Rosalynn, celebrated New Year’s accordingly with a kiss! The sweet kiss was captured on camera by a longtime friend. Carter leaned in to give his wife a smooch as she pulled down her mask. They are now the longest-married presidential couple as of last year, surpassing the late George H.W. Bush and Barbara Bush.

“I caught these folks kissing in my driveway tonight! If that doesn’t make your New Year start out right nothing will!! 🥂HAPPY NEW YEAR 🥂” writes their longtime friend Jill Stuckey on Facebook.

I caught these folks kissing in my driveway tonight! If that doesn’t make your New Year start out right nothing will!!
🥂HAPPY NEW YEAR 🥂

The photo was obviously met with tons of positive and kind reactions. “What a lovely and joyful picture!” someone writes. Another says, “To have an immortal love like theirs. Love their hearts. Happy New Year Jill!”

RELATED: Jimmy And Rosalynn Carter Break Their Own Record As Longest-Married Presidential Couple

This also isn’t the first time the couple has been caught giving each other some love on camera. Back on Valentine’s Day 2019, they were spotted on the ‘Kiss Cam’ at the Atlanta Hawks game. Of course, they give the crowd exactly what they were anticipating!

They did so again on the ‘Kiss Cam’ at the Atlanta Braves game!

Rosalynn herself even admits that she allowed herself to break her one rule; no kissing on the first date! Of course, she allowed Jimmy in this case and the rest is truly history. “The best thing I ever did was marry Rosalynn,” Jimmy says during a 2015 CSPAN interview. “That’s the pinnacle of my life.”