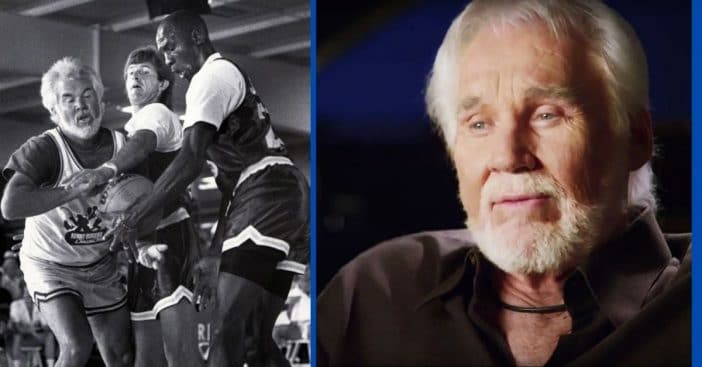 Many people have some specific skill that lets them strut their stuff. So, when contemplating basketball legends and country music icons, there’s very little crossover. However, Kenny Rogers made everyone think again when he faced off against Michael Jorden in a 1988 pickup game of basketball.

He didn’t just face off against the NBA legend; Rogers actually held his own. As Outsider notes, Rogers bears the nickname Gambler and he certainly turned the odds around. All the while, the two stars participated in an event motivated by a good cause. Read more about this peculiar and monumental meeting here.

On one end of the court stands Michael Jordan, six-time championship winner with the Chicago Bulls, who the NBA official website declares: “the greatest basketball player of all time.” At the other end stands Kenny Rogers, Country Music Hall of Fame inductee and famous chart-topper for months on end. The odds seem clear on the basketball court between sportsman Michael Jordan and Kenny Rogers, right?

Well, considering the odds, Rogers actually managed a pretty remarkable victory during their game. By hitting Jordan with a pump fakeout, Rogers shook the NBA player. That gave Rogers just enough of an opening to attempt a jump shot – and land it.

Rogers enjoyed a brief victory with his team. Very soon after, however, Jordan made up for the remarkable upset with the moves followers would expect from him. Fortunately, their arrangement helped everybody win regardless of whoever scored the most points. Though, of course, Rogers would be able to say he managed to score against the man who helped uplift the NBA’s fame to match his own.

At the end of the day, the match, which took place in 1988, was part of the Kenny Rogers Classic Weekend. The three-day festival utilized various forms of entertainment to raise funds for charities. Events included concerts, fishing, tennis, golf, and basketball.