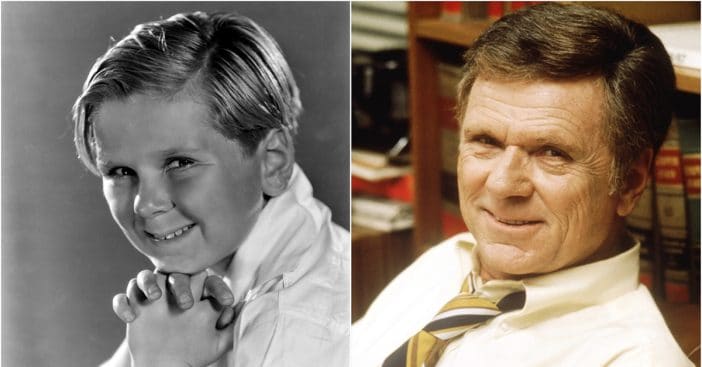 You can go through the history of the young cast members of The Little Rascals and come away from it either shaking your head with pity at the fates that befell many of them or wondering how they could have just disappeared from the business the way that they did. While there were, of course, happy endings among some of them, it’s tough to think of anyone who flourished in the same way that Jackie Cooper did and why he’s so favorably remembered. And this despite the fact, whether or not you realize it, many of his installments of the Our Gang film series are tough to come by.

In an in-depth video interview from 1999, Jackie shared that he began appearing in the shorts as they were transitioning from silent to sound. “It was between 1928 and 1929 and sound was just coming in,” he said. “That’s why the ones I’m in aren’t played very much today. When they are on TV, you have to turn your TV way up when you watch, and if you do, you hear a lot of the off-stage noises. You know, traffic in the distance and so forth. And you hear the director saying things like, ‘Turn around, Jack.’ They couldn’t get the directors used to sound; they were so used to directing these kids in silent films, so not many of those get played.”

RELATED: Here’s What Happened to Spanky from ‘The Little Rascals’ as Told by a Close Friend

Something else that allowed Jackie to stand out from anyone else, is that at age 9, he was nominated for an Academy Award in the category of Best Actor for the 1931 film Skippy. For nearly half a century he remained the youngest person ever nominated.

Jackie was born on September 15, 1922, in Los Angeles to a showbiz family. His mother was a stage pianist, his stepfather a studio production manager, and his maternal aunt and uncle respectively an actress (married to director Norman Taurog) and screenwriter. On top of that, his grandmother was an aspiring actress (and happy enough to be cast as an extra) who would sometimes take him with her on auditions. Jackie himself would be hired at age three in a series of Lloyd Hamilton comedies and came to be known as “Leonard.” Through recommendations, he was given an audition by Hal Roach and hired in 1929 to a three-year contract.

His first short was “Boxing Gloves,” which wrote out Joe Cobb and ushered in Norman “Chubby” Chaney. Originally intended to be more of a background player, Jackie’s personality and performances quickly moved him to center stage — most memorably in “Love Business,” in which he and Chubby compete for the affection of Miss Crabtree (June Marlowe).

In 1931, Hal Roach — who certainly knew how to make a deal — agreed to “loan” Jackie to Paramount Pictures to star in the film Skippy, which was going to be directed by his uncle Norman. At the time, Jackie was being paid $50 a week, but Roach was paid $25,000 for the young actor’s services. Following Jackie’s Academy Award nomination, his contract ended up getting sold to Louis B. Meyer of MGM and he was out of Our Gang after shooting only 15 episodes (though admittedly it feels like much more).

Jackie worked steadily throughout the 1930s and early 1940s, but the quality of roles began to diminish and he decided not to push it, recognizing, as he relayed to film historian Leonard Maltin, that he’d never really had the opportunity to test what kind of actor he was. “Kids didn’t act in the movies when I was a kid,” he explained. “One kid has a unique voice, another has a disarming smile, another has a pathetic kisser and looks underprivileged. Whenever they want a certain quality in a kid they hire one who has it. And if you’re successful, nobody wants you to change. After a while you get conditioned, and it’s a miracle if you ever amount to anything as an adult actor.”

Well, Jackie did. It began with him enlisting in the Navy in World War II, through which he really did grow up. By the time he got out, he’d decided to treat his career far more seriously. One of the first things he did was star in a 1950 Boston stage production of Mister Roberts as Ensign Pulver. He also took on a pair of TV sitcoms, 1955’s The People’s Choice and 1959 to 1962’s military comedy-drama Hennesey. But then he went in an unexpected direction by, after making a number of guest appearances on a variety of shows, becoming vice president of program development at Columbia Pictures’ Screen Gems TV division, a position he held from 1964 to 1969. His job was to put TV series “packages” together, the most memorable of which was Bewitched.

From there, he would star in TV movies, play Daily Planet Editor-in-Chief Perry White in the Christopher Reeve Superman films, and spend much of the late 1970s and 1980s working behind the camera as a director, earning a pair of Emmys for his work on M*A*S*H and The White Shadow.

In his private life, he was married three times and was the father of four. He died on May 3, 2011, of natural causes at the age of 88. But looking back at it all, one has to imagine that it was very much a full and rich life.

Click for next Article
Previous article: SNL’s First Black Cast Member, Garrett Morris, Is 85 And Has No Plans To Retire
Next Post: John Stamos Reunites With The Beach Boys In Concert To Honor Bob Saget