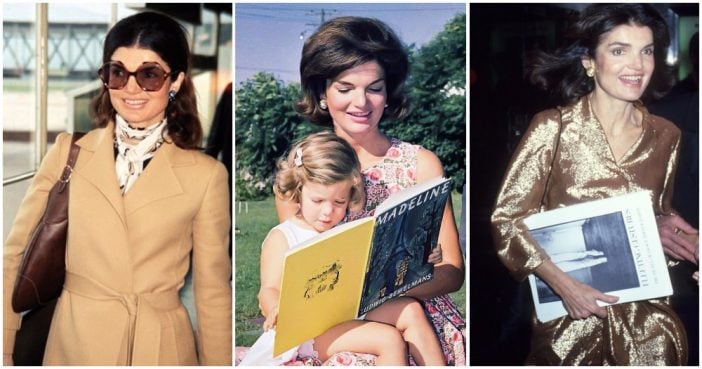 Jackie Bouvier Kennedy is one of the most influential fashion icons of all time. Before becoming First Lady and Princess of the Pillbox Hat and Pearls, Jacqueline Bouvier earned an internship at Vogue and was named “Debutante of the Year” by a Hearst magazine columnist. The Manhattan teenager was destined for greatness — or at least great outfits.

The beloved former First Lady once said: “My only routine is no routine at all.” Her fashion choices prove it; they’re ever-exciting, extravagant, and timeless.

Here are 15 of Jackie Kennedy’s most iconic style moments.

Jackie Kennedy Onassis is seen here hand in hand with son John Kennedy Jr., at an inauguration for a memorial for her late husband in 1965. This ensemble is classic Jackie O. Despite her unimaginable grief, the First Lady looks as lovely as ever — donning her classic pearls, suit, and pillbox hat.

Long flights never kept Jackie Kennedy from remaining stylish. No sweatpants or flip flops here! The First Lady was snapped in Heathrow Airport in London waiting for her flight to New York. Clad in a Yves Saint Laurant coat and oversized sunglasses, Ms. Kennedy made a public airport her runway. We just hope she got a bit more comfortable on the plane — that’s a six-hour flight!

Mrs. Kennedy shined in a lovely pale yellow on a trip to Palais de l’Elysee. Little known fact: Jackie had scored a visit to France once before. When she was 22 years old, an extremely well-received personal essay earned the writer a six-month internship at French Vogue. Perhaps more shocking, the future fashion icon quit after the first day.

This photograph looks like a J.Crew ad! The tennis partners were engaged at the time. Jacqueline grew up in an affluent household, enjoying tennis matches and rides on her pony. Her father was a Wall Street stockbroker, while her mother was a well-known Manhattan socialite.

This photograph, taken in 1961, shows a more personal side to the fashion icon and former First Lady. Jackie is sitting with her eldest daughter Caroline, who was 3 years old at the time. The pile of dolls and way Caroline gazes at her mom are just adorable.

Here’s Jackie playing house with yet another little girl — but she’s not Caroline! This moment was captured amidst the First Lady’s trip to the National Institute for the Protection of Infants in Mexico. Jackie made more international trips than any of the previous First Ladies.

Page Page 1 of 2
Previous article: The Worst Stereotype Of Each Of The 50 States
Next Post: Look into these Eyes and Guess Who the Leading Lady is?