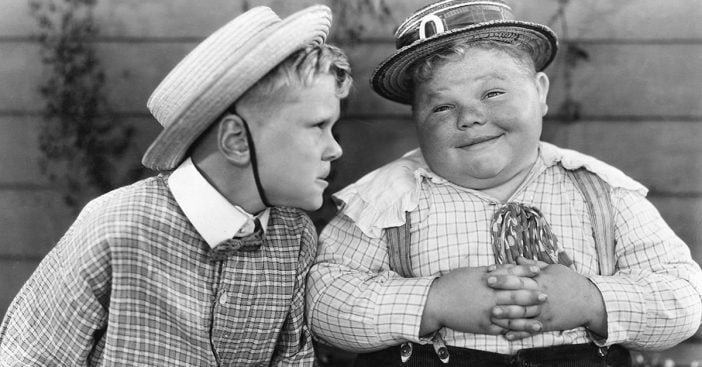 There is something so bizarre about the fact that The Little Rascals, beloved for generations for its celebration of the joy of childhood, also has so much pain associated with its history. Many of its young performers were taken away by circumstances beyond their control, while others descended down paths of self-destruction. Norman Chaney — who memorably informed us in the film short “Love Business” that he preferred to be called Chubsy-Ubsy and was part of Our Gang in the days before Spanky, Alfalfa or Darla — was definitely part of the former.

Norman was born October 18, 1914 in Cambridge, Maryland, and found the road to stardom at about the same time that the sound era began in movies. Coincidentally, the heavy-set Joe Cobb was aging out of the series, which meant that producer Hal Roach and director Robert F. McGowan were looking for someone younger, but with a similar build. They found him in Norman, who was 3′ 11″ at the time and weighed about 113 pounds.

RELATED: ‘The Little Rascals’: By 1959, Much of ‘Our Gang’ Was Running into Tough — Sometimes Deadly — Times

Given the name “Chubby,” he made his debut in the second sound short, “Rail Roadin’,” and would appear in a total of 19 films over the next two years. Described Leonard Maltin and Richard W. Bann in their book, The Little Rascals: The Life and Times of Our Gang, “The changing of the guard was celebrated in publicity photos and stories and an entire film. ‘Boxing Gloves’ was contrived to feature the two fat-boys of Our Gang before Joe Cobb retired and Chubby took his place … His natural flair for comic dialogue and his open, friendly personality made Chubby an instant hit in Our Gang.”

Only a Short Time with the ‘Gang’

Generally speaking, Norman’s time as part of the group was relatively short, part of the problem being that it was obvious that he was getting a little taller and was definitely putting on more weight without really trying. When his contract with Hal Roach Studios wasn’t renewed in 1931, he and his parents agreed that acting was not for him and they moved back to Baltimore. There he attended public school and did very well in his classes.

Unfortunately, while his height stopped at 4′ 7″, his weight ballooned to 300 pounds. Eventually, it was discovered that he suffered a glandular ailment. He underwent a treatment for it in 1935 at John Hopkins University and, as a result, his weight dropped pretty quickly from 300 pounds to 140. The process continued until he’d gotten down to 110 pounds and he would shock everyone by dying on May 29, 1936, of myocarditis (an inflammation of the heart muscle). He was only 21.

The next day, The Chattanooga News featured a short item with the terrible headline, “Our Gang Comedy Fat Boy is Dead.” The piece reads, “Norman Chubby Chaney, the fat boy of Our Gang comedies, is dead. He was 17 [sic] years old. The boy returned here in 1932 after two years in Hollywood. He became ill last year and went to the John Hopkins Hospital for treatment to a glandular ailment. He failed to rally after an operation and died yesterday at the home of his parents.”

While Norman was buried in Baltimore Cemetery, there was no headstone on his grave due to the fact that his mother couldn’t afford one for him or herself. Amazingly, 76 years later, Detroit rock musicians MIKAL managed to organize a fundraiser, pulling together $4,500 for headstones to be placed on their graves — a remarkable thing to do so many years after Norman’s passing.

Around the time of his death, the “Little Hollywood” column of The Salt Lake Tribune offered up this tribute: “From Chubby Chaney, I have a letter, buried somewhere on one of my five shelves, and I can remember some of the things he said: ‘I have a pony, but can’t ride it, for when I get up on its back, the poor thing actually cries. I am too short to ride a horse, so I can’t ride anything at all. I have a dog which I love so much I feel that it is part of me. Some day I should like to play baseball like other boys, but I am so heavy that I can’t run. Write a nice story about me now, and can I have my picture in the paper?’ Poor, good-natured Chubby. He wanted to be ‘just like other boys.’ He died following an operation. Well, I did write the ‘article’ after all, didn’t I? But it isn’t anything like what I had planned.”

Click for next Article
Previous article: At 72, Elaine Bromka From ‘Uncle Buck’ Writes About First Ladies
Next Post: After News Of James Caan’s Passing, Tributes From Hollywood Stars Pour In