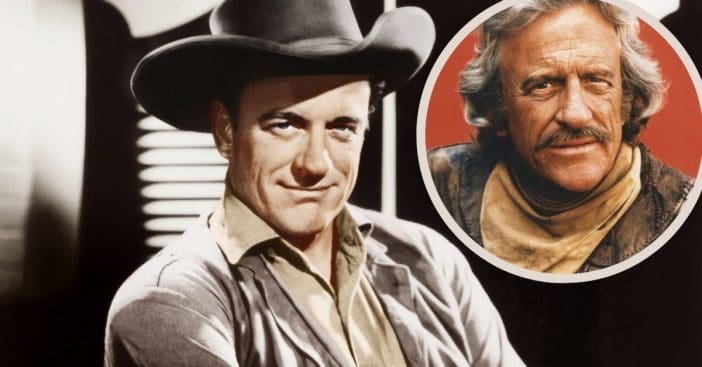 It’s time to get out of Dodge and visit some paths tread decades ago. Mount your horses and prepare for a wild ride revisiting the cast of Gunsmoke. Some call this sweeping western America’s very own Iliad and the Odyssey. For years, Saturday evenings belonged entirely to Gunsmoke. At the forefront of this massive program was Marshal of Dodge City, Matt Dillon.

When Gunsmoke grew from a radio show to a TV program, James Arness played the man who’s considered justice incarnate. Fittingly, James Arness had a similarly impressive life even before joining the cast of Gunsmoke. Despite his reputation as a poor student, he set lofty goals for himself in the U.S. Army. He became a rifleman and was among the very first to exit his platoon’s landing craft because of his height. However, he did suffer a leg injury that required surgery and resulted in an honorable discharge. Pain from that wound would plague him throughout his career.

Did James Arness ride his own horse in Gunsmoke?

After he was discharged, only then did Arness start work relatively close to entertainment. He attended college and became a radio announcer. Already, he showed some of Marshal Matt Dillon’s determination when he then hitchhiked all the way to Hollywood, the better to start scoping out agents and roles. Soon, his impressive height, build, and overall aura helped him become a staple of the western genre and great friends with John Wayne himself. In fact, Wayne recommended Arness personally for the role of Dillon.

Not one to shirk his responsibilities, James Arness did in fact do many of his own stunts on Gunsmoke. This included horseback riding, an act that actually triggered his wartime leg pain. But he worked around it. While his limp came from a real place, his deputy Chester Goode walked with an artificial limp from the Civil War. But that helped establish their dynamics as well. Dennis Weaver just looked too much like a lead man, even next to Arness.

What happened to the Marshal after ‘Gunsmoke?’

American viewers know James Arness best as the Dodge City Marshal. However, Europeans recognize Arness first as the character Zeb in How the West Was Won. It became something of a cult classic across western Europe. Arness kept himself busy outside of the famous western Gunsmoke but he didn’t forsake those roots completely. In fact, he acted for it for five whole decades.

During his downtime, though, the Minnesota native adapted swimmingly to life in California. He especially came to love surfing. So, beach-goers could spot the 6-foot-7-inch Marshal Matt Dillon hanging up his holsters and shredding some tubular waves, brah. Sadly, the towering actor passed away in 2011. However, he and his sheriff star shine on thanks to a Hollywood Walk of Fame Star. Additionally, fans can see titles with his late brother (of Mission Impossible fame) Peter Graves’s involvement. His final role came from NBC police drama McClain’s Law, which aired from 1981-82. At the time of his death, he was survived by his wife Janet, sons Rolf and Jimmy, and six grandchildren.