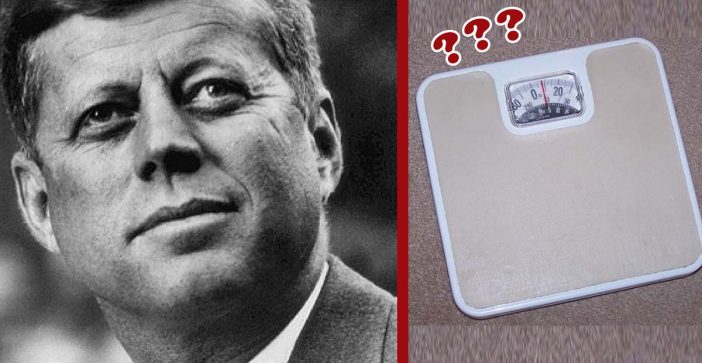 His weird quirk was that he always traveled with a bathroom scale. He was reportedly obsessed with his weight. He also avoided swimming in public without a shirt. He apparently felt sensitive about his “Fitzgerald breasts.”

This fact was revealed in JFK’s Last Hundred Days by Thurston Clarke. JFK was not overweight and he shouldn’t have been obsessed with his weight. He was six feet one inch tall and about 172 pounds.

So, why was he so obsessed with his weight? Apparently his mother, Rose Fitzgerald Kennedy tracked the health of her nine children. She would write down their weight, shoe size, illnesses and other facts about their health and exams. She also reportedly told the children they needed to lose weight.

JFK’s parents were obsessed with weight. They also told this to Rosemary, JFK’s younger sister. Their mother told her that she couldn’t eat dessert because she was overweight. She reportedly would look out for desserts to sneak when her mother wasn’t around.

Always traveling with a bathroom scale seems funny but it does show us that even Presidents are human. JFK had some personal struggles just like everyone else. Even Presidents who are clearly healthy and a good weight can have weight issues. We can’t believe that he never traveled without a bathroom scale!

John F. Kennedy was assassinated in 1963 in Dallas, Texas by Lee Harvey Oswald. It was a crime that shocked the world.

Did you know that JFK always traveled with a bathroom scale or had any issues regarding his weight? Have you read any books about JFK and learned about his life and his family situation? Do you have any similar stories from your family and your past?

If you found this article interesting, please don’t forget to SHARE with your friends, especially if they enjoy reading about all things JFK.