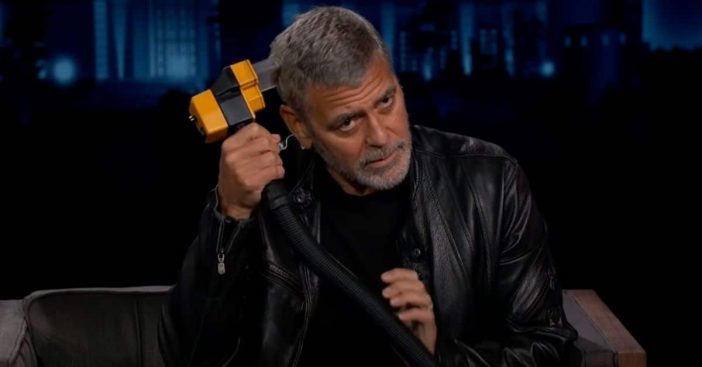 When salons and barbershops started closing, the future of people’s hair became uncertain. Some braved a home haircut while others let it grow. George Clooney never faced that issue thanks to reliance upon an old classic: Flowbee.

This year, Flowbee Google searches and sales skyrocketed. Quarantined individuals found themselves discovering just what this device is and does. For those willing to use this haircutting attachment, it’s been a real game-changer. But Clooney already knew that.

Sucking away all the hairy stuff

Carpenter Rick E. Hunts developed the Flowbee and filed a patent in 1986. His vacuum-like attachment sucks up cut hir like a vacuum. In fact, users simply attach the Flowbee to a vacuum they already have or to the Flowbee Mini Vac, a device solely dedicated to vacuuming up hair. Once cut, hair enters the chamber instead of falling as a mess to the floor, down clothes, moving around the head, and so on.

Hunts went from selling his product out of his garage to providing a helpful tool for astronauts in space. While in zero gravity, they try to minimize the number of items floating around, from food and drink to eraser shavings – and hair. With one device, users get a haircut and clean up at the same time. That’s because this one contraption comes with a few built-in tools to get the job done: clippers and spacers of different lengths allow the user to choose the cut they want.

Earlier in March, businesses began closing, including hair salons and barbershops. While some tried their own thing with fun results, others waited it out. For George Clooney, that was never an issue because he’s utilized the Flowbee for over 22 years. In all that time, he notes, “My haircuts take literally two minutes.” Fortunately, he has easy stuff to work with. Clooney added, “My hair’s really like straw, and so it’s easy to cut, can’t really make too many mistakes.”

The Flowbee saw major fame in the 1980s then sales remained unremarkable. By March, they ended up sold out at Walmarts and online via Amazon. Clooney endorsed Flowbee on various outlets, including Jimmy Kimmel Live about a week into December. After that, Google search trends for Flowbee rose exponentially. Additionally, Flowbee’s official site crashed. While The Guardian notes the device’s popularity already rose from the pandemic, it does also add Clooney’s mention definitely added more momentum from the old favorite of the ’80s.

After hearing that interest piqued following his endorsement, Clooney joked on Sirius, “I should have gotten stock in that company before I told that story. I really screwed up on that one. So now I know: Next time I endorse something, I’m going to own some stock before I do.”