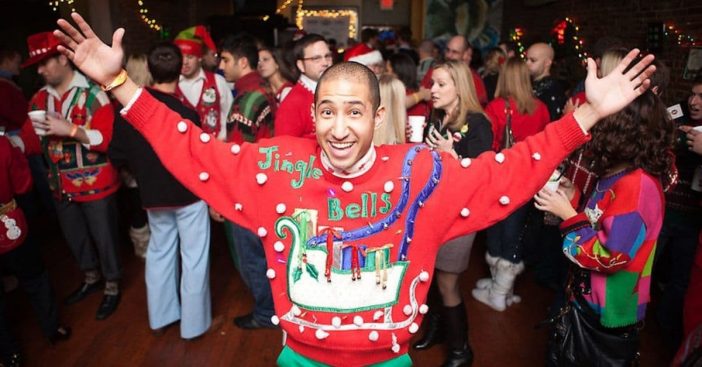 Twinkling lights and peppermint sticks, Santa Claus and reindeer, mistletoe, and holly – these items are meant to evoke the warm and fuzzy feelings of Christmas. But there is another element to Yuletide cheer that has become a staple of the holiday quite recently: the ugly sweater.

Ugly sweaters have made a huge comeback in the 21st century. These gaudy fuzzy garments feature large knitted depictions of Santa, snowman, and other characters, with pom-poms, bobbles, and bright colors of red and green. Some of the more nuanced sweaters have even been equipped with battery operated lights. But why would anyone want to wear an outfit that is always prefaced with “ugly?” What caused the popularity of this wacky holiday trend?

The concept began in the 1950s. Known as “Jingle Bell Sweaters” these holiday-themed sweaters were less gaudy than today’s version and not very popular. They could usually be found on dorky dads and old crooners like Val Doonican. In the 1980s, however, the ugly Christmas sweater took on a new meaning. Thanks to comedic characters like Clarke Griswold in Christmas Vacation the garment became a cozy, heartwarming expression of Christmas cheer. Although the gaudy pullovers were not exactly “fashionable” they were met with a smile and the occasional good-natured eye-roll.

This trend, however, died out by the 90s. Then, like a Christmas miracle, they were back. Ugly sweater parties started kicking off around the early 2000s and became immensely popular. Brian Miller, one of the authors of “Ugly Christmas Sweater Party Book: The Definitive Guide to Getting Your Ugly On,” stated in a phone interview, ” “It’s hard to say what triggered the change in perspective, but I think that the moment someone wore the garment in a humorous way, people started seeing the comic side of it.”

In the 21st century, the ugly sweater has become synonymous with Christmas. Whether consumers need a party outfit or just something warm and cozy to make them feel festive, retailers have caught onto this trend. Fashion giants like Topshop and high-end retailers like Nordstrom stock their shelves with ugly sweaters. Fast fashion retailers like H&M and Asos also make sure to include them in their winter selections. And vintage shops and thrift stores enjoy a surge of holiday shoppers seeking just the right amount of ugly and festive.  There are now also companies like Tipsy Elves and UglyChristmasSweater.com that have made a business out of just these sweaters.

Ironically enough, the “ugly” sweater has even been released by high-end fashion companies such as Givenchy and Dolce and Gabbana. In 2012 the UK charity Save The Children launched Christmas Jumper Day, a fundraising event encouraging the most garish and outlandish holiday outfits. Christmas sweater themed events, runs, pub crawls and more began to crop up. And even celebrities like Kanye West and Taylor Swift embraced the trend. After decades of coming and going, it seems the ugly sweater is finally here to stay.

Click for next Article
Previous article: Costco Has Updated Its Senior Hours During The Pandemic
Next Post: ‘Little House On The Prairie’: Drug And Alcohol Use Was Typical On Set