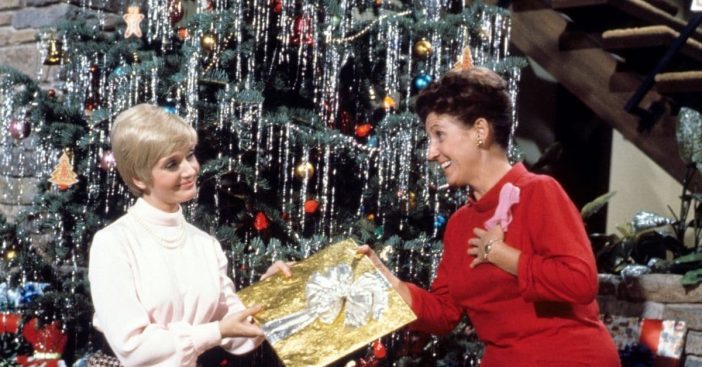 When snow falls, holiday decorations come up. Today, many decorations feel like timeless parts of the Christmas tradition. But every trend has its origin. So, why did tinsel become such a craze? How did it even gain traction?
Holidays such as Christmas enjoy popularity around the world. The revelry takes different shapes depending where you look, though, in part because of that nation’s own history. As people travel, so too do their customs. So let’s track the footsteps of tinsel as a Christmas tree decoration.

Today, one festive rite of passage includes unraveling strings of lights to wrap around and through a Christmas tree. The twinkling glow of these bulbs perfectly compliments the colorful ornaments scattered among the pines. Centuries ago, people did that too – except in place of string lights, they used actual burning candles. For safety’s sake, that practice burned out, though.
RELATED: Be Careful This Christmas — These 5 Holiday Plants Can Poison Your Furry Friend
But before it was extinguished, the practice enjoyed a lot of popularity in what is today Nuremberg, Germany, as far back as 1610. BBC explains that the reflective metal strips helped amplify the glow of the candles by reflecting their light. So, a dozen flickering flames suddenly appeared as 24 or more. At first, Germans used strips of real silver to achieve that charming twinkling look. But, understandably, this method proved rather expensive. And that money ended up essentially thrown away since the silver tarnished. So, as humanity is wont to do, they got creative.

Tinsel as we came to know it

The 1900s saw an influx of immigrants from modern-day Germany to America. They brought some funds, possessions from their home, dreams, and traditions. Shrugging off expensive, tarnished silver, they instead used aluminum and copper. Both did serve their purpose for creating that twinkling effect in trees set against candles. However, again, the candles proved what a hazard they are. The aluminum and copper were very flammable beside those flames, despite their affordable price and lasting shelf life so to speak. And when World War I (then the Great War) started, all copper production went towards the war; nobody wanted metals going towards anything frivolous.
As time passed, the people continued to demand tinsel for their Christmas trees. In those days, people turned as they often did to lead. Lead emerged as the ideal material choice just in time for the advent of electric string lights soon after, so people did not fear fires as much anyway. At the time, no one quite knew the looming danger lead presented, going so far as to write in newspapers, “Tinsel is fairly safe, because even if kiddies decide to swallow it, it will not cause poisoning.” However, mounting realization that lead was, indeed, a problem caused even lead tinsel to fall out of fashion. Its successor, plastic, never quite fulfilled all the wants people had for their glittering tree, and so, gradually, tinsel diminished as a Christmas decor staple. For some, anyway. Others still honor this unique tradition. Do you still use tinsel? What material did you use?
Click for next Article