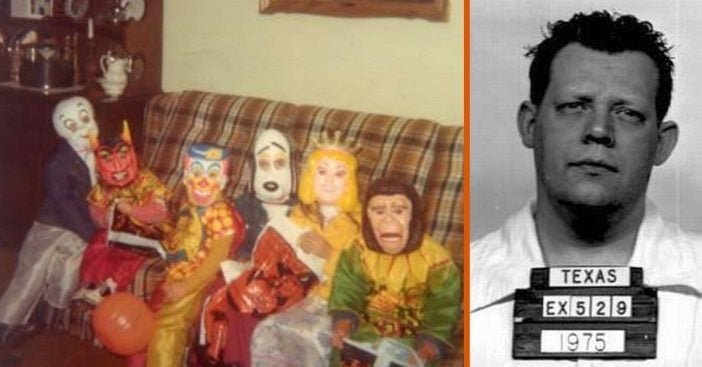 Moments captured by photos remain suspended for all eternity. But while the picture itself remains static forever, its subjects do not. One rather famous, cryptic photo makes the rounds every Halloween. It’s associated closely with a figure often called the Candy Man, who inspires dread in children and parents alike.

The story behind the Candy Man and eerie photos such as the one below stems from tragedies that occurred on Halloween. They also come from subsequent films that further fueled the myths of the holiday. Learn more about these chilling events here.

Halloween fell on a Thursday in 1974. On that night, Esquire writes, Timothy O’Bryan enjoyed the Halloween festivities with his friends. At the age of eight, the Texas resident donned a costume from Planet of the Apes. His sister and their neighbors stuffed into their own costumes, complete with masks and bright, crinkly fabrics. When they went trick-or-treating, rain soon began to fall, so their night was cut short. But they had time to collect candy from some places, including some beloved, nostalgic treats like a Pixy Stick.

It was on that Pixy Stick that “the man who killed Halloween,” the Candy Man, is alleged to have delivered his fatal poison. Before November even arrived, young Timothy O’Bryan stayed huddled over the toilet, sobbing and retching while his father held him. Results from an autopsy report found traces of potassium cyanide. All of Timothy’s friends, dressed in their bright costumes, had received a Pixy Stick, but only he had eaten it. And the candy came from his own father, Ronald Clark O’Bryan, heavily in debt and wanting to collect insurance money.

O’Bryan’s actions and Timothy’s gruesome murder indeed threatened to kill Halloween, but also fueled a new wave of chilling myths based heavily around the crime consistent with the holiday’s scary atmosphere. Joshua Zeman’s 2014 Killer Legends explores this myth along with true crime stories of a similar nature. But his story comes with a twist, however, an eerie parallel that had the Internet buzzing for some time.

The picture above does not depict Timothy O’Bryan, his sister, and their neighbors. Allegedly, it’s a modern-day Brad Searles sharing a memory in 2006. So, when the 2014 movie used this picture Searles posted on Flickr, watching it, he felt chills. Those came especially when the narration kicked in, using him as a stand-in for the murdered boy. “It doesn’t say it, but when you’re zooming in and saying he wore this costume, it subtly zooms in on my costume and my face, and it says he died that night of cyanide poisoning. That’s when I got super creeped out. Totally disturbing,” he outlined.