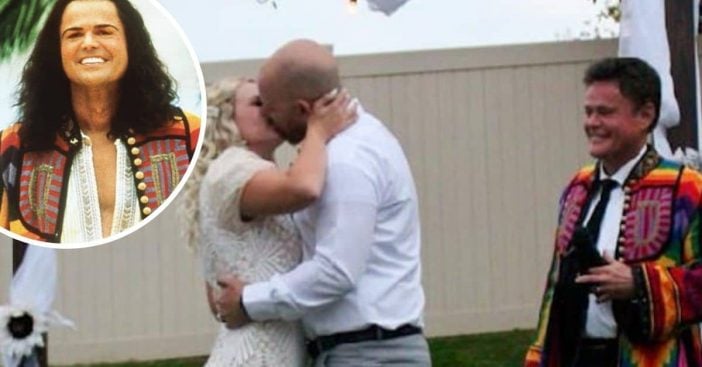 Donny wrote, “Never in a million years did I think that I would be asked to marry someone. Last Saturday I took on the title of Pastor Osmond. My dear friend, Todd Salmon, asked me to marry him and Rachel on 10/10/20. Todd has always loved the musical, ‘Joseph and the Amazing Technicolor Dreamcoat.’ In fact, he saw me in that musical several times.  Just before I married them, I said, ‘Pastors would normally wear a robe. This pastor will now wear a coat.’ ”

Donny became a Pastor for the day to marry his friends

He continued, “I then pulled out my original Joseph coat, put it on and said, ‘By the authority vested in me by the state of Utah, I now pronounce you husband and wife.’ Everyone thought that it was pretty cool that ‘Joseph’ performed the marriage. Anyone else want to get married? Sorry, my license was only good for that wedding.”

Donny doesn’t often talk about his faith, but he is a member of The Church of Jesus Christ of Latter-day Saints. He talks more about his faith on his website. Joseph and the Amazing Technicolor Dreamcoat is a play and movie chronicling the story of Joseph from the Bible.