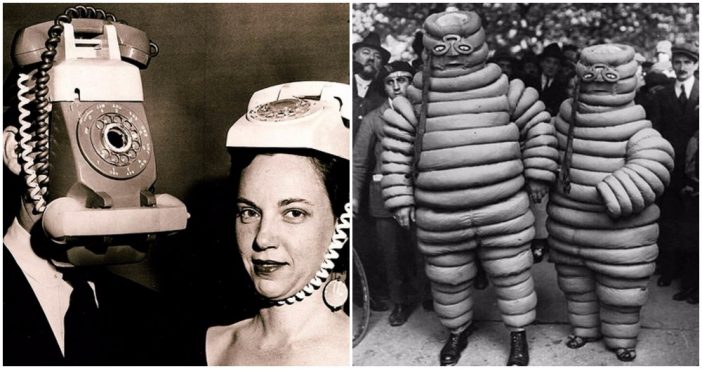 Among other things, Halloween is the time of year where people can really express their creativity. Whether it’s carving pumpkins, baking desserts, or putting together eye-catching ensembles, there’s a chance for everyone to show their artistic sides.

That said, sometimes pulling off the perfect costume can feel like an impossible feat. What should you be? How much can you afford? Ultimately, there are a thousand costume-centric questions that Halloween might force you to confront.

This isn’t just a modern concern. Back in the day, folks had their fair share of awesome, bizarre, strange, and downright creepy costumes! You can check out some of the spookiest vintage costumes below…

1. What is she supposed to be? A cabbage patch? A woman covered in leaves? Rabbit food? Where are her arms? This woman’s costume inspires so many questions that you can’t help but feel like it’d be the talk of any Halloween party.

2. Want to keep it simple this Halloween? No problem. Here is the mid-20th-century version of buying a mask at the discount dollar store and then calling your costume complete. Strap a phone to your head and you’re good to go. Warning: It might be a little tough to see if you attach the phone directly to your face, like the guy on the left.

3. Which is a stranger: the odd we-know-all-your-secrets gaze of the garden gnome or the listless, captive stare of the mushroom on the right? Either way, remember that this group was so enamored with their costume choice that they went to a special, thematically relevant location for a photo shoot. Can it get any weirder than this? (Hint: you bet.)

4. No, this isn’t an 20th century re-branding effort of the “Michelin Man” gone horribly awry. The folks sporting these costumes—whatever the heck they might be—were likely impervious to damage sustained from rolling down a hill. Just don’t ask them to stand up if they end up on their backs.

5. You’d be hard-pressed to find someone who doesn’t love a few slices of crispy bacon. Unless, of course, the bacon hock has a man inside it. Even still, that didn’t stop this man from winning 1894’s Covent Garden Fancy Dress Ball.

Page Page 1 of 3
Previous article: The Devastating Story Of The Boy Who Played Micheal Banks From Mary Poppins
Next Post: Nik-L-Nip And Other Weird Waxy Candies That Are Sure To Bring Back Memories