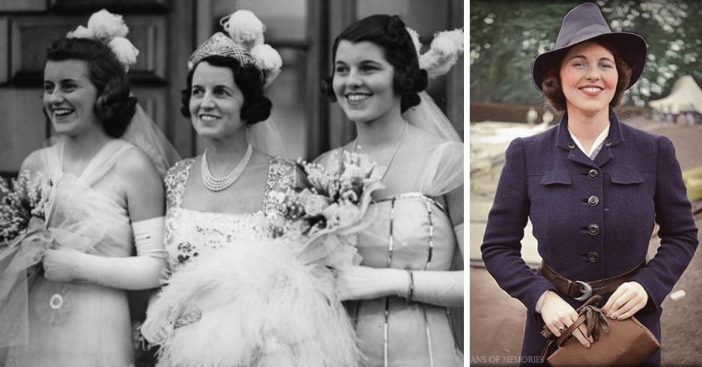 The Kennedy’s are without a doubt one of the most famous families in American history. Unfortunately, they are also famous for the number of tragedies that have befallen them, aka the “Kennedy Curse.” Joe Jr. was killed in action in World War II, JFK was (of course) assassinated, as was his younger brother Robert the night he won the California Democratic Presidential Primary. One of JFK’s sisters Kathleen died in a plane crash, and still another sister seemed to disappear altogether…

Rose Marie “Rosemary” Kennedy, the eldest daughter of Joe and Rose Kennedy, did not die young like so many of her siblings. She did, however, end up suffering a terrible fate that led to her to eventually being hidden away from the public eye.

When Rosemary was born on September 13, 1918, the family physician was not able to arrive immediately. The attending nurse ordered Rose to keep her legs shut until the doctor arrived and when this didn’t work, held the baby’s head in the birthing canal for nearly two hours. It didn’t take long for the effects of this traumatizing birth to become apparent. Rosemary was developmentally delayed and, despite Joe and Rose’s best efforts, would never advance intellectually past the fifth grade.

Despite this, Rosemary was sociable, amiable, and well-liked. She enjoyed fashion, swimming, and going out on the town. When the family relocated to the United Kingdom, Rosemary even made quite a favorable impression when presented to the King and Queen in a debutante “coming out” to high society. She also began attending a Montessori school, where she flourished academically and socially. Her lead educator wrote to her parents that Rosemary had made “remarkable progress” and that there had been “a great change in her lately.”

Unfortunately, this was not to last. As the threat of Germany and World War II loomed ever nearer, Rosemary had to be moved out of England and back to the States. Her behavior became more difficult after that. She took to fighting and leaving school to roam the streets of D.C. and Rosemary’s parents began to seek a new solution. Joe Sr. had heard of a brand new procedure – the prefrontal lobotomy. A lobotomy is a “surgical procedure in which a nerve pathway in a lobe or lobes of the brain is severed from those in other areas.”

Lobotomies were extremely unreliable and dangerous procedures.  In fact, the surgery often caused further damage and even ended in death for some patients. Despite this, Joe Sr. decided that Rosemary would go through with it. She was awake for the entire procedure and doctors asked her to recite prayers and tell stories while they shaved away at her brain, only stopping after she went quiet. Rosemary was never the same after that.

After the surgery, Rosemary Kennedy’s mental state regressed to that of a two-year-old. Joe Sr. immediately sent her to a psychiatric hospital in upstate New York. Rosemary’s siblings did not know about the lobotomy, or even where their sister was, for years. Eventually, they discovered the horrible truth.

Rosemary’s situation inspired her brother, John, to enact several pieces of legislation that funded research and programs for the disabled. Her sister Eunice, who she was closest to, also went on to create the Special Olympics. In the 70’s Rosemary began attending family events. Her nephews and nieces did their best to create a caring, loving environment for their aunt. Rosemary died of natural causes at the age of 86, surrounded by her four surviving siblings.