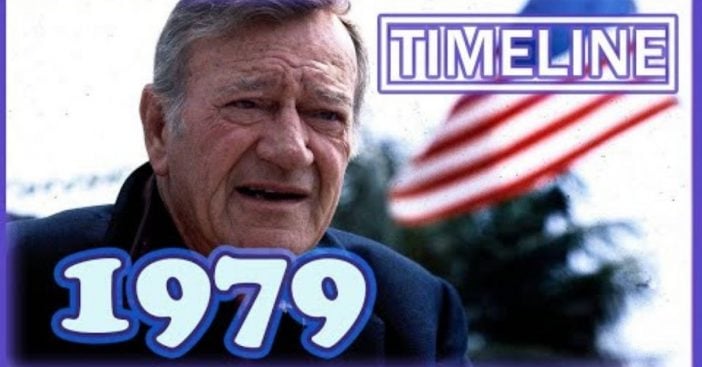 I love the smell of napalm in the morning. It smells like… 1979! A year of exploding records, long lines, illuminated dance floors, revolutions on and in TV, and so much more. Today we’re taking a trip down memory lane all the way to the end of the swingin’ ’70s! And now, on to the news.

Watch the full video of a Blast from the Past: 1979 Remembered..

Newscasters in 1979 sure were busy little bees, as the year was practically filled to the brim with momentous events. Ford Pintos had been one of the most popular cars of the past decade, but due to a design flaw, they couldn’t stop exploding! Margaret Thatcher became the first democratically elected female head of state in European history when she became Prime Minister of the United Kingdom. There was a meltdown at the nuclear plant at Three Mile Island which, although causing no long-term harm, was foreshadowed by the release of the popular movie The China Syndrome days earlier and panicked a populace living in constant fear of nuclear annihilation during the Cold War.  But the event which dominated the headlines in 1979 was the crisis in Iran. In the early part of the year, the Islamic Revolution had come to a climax, resulting in the Shah of Iran abdicating and fleeing to the U.S.

When the United States refused to return the Shah to face trial for crimes related to his rule, thousands of students stormed the U.S. embassy in Tehran, taking 52 American citizens hostage in the process. The hostages were held for a total of 444 days, and U.S.-Iran relations have never recovered. But the hostage crisis was not just a massive political event, it also had dire consequences for the U.S. economy.

The revolution in Iran slowed oil production to a crawl, causing prices to skyrocket worldwide and leading to a potential fuel shortage. Lines miles long formed at gas stations across America as the public panicked and attempted to hoard gasoline.

If spending hours in line burning gasoline in order to buy more gasoline seems just a bit counterproductive, you’d be right, as it was estimated that Americans wasted up to 150,000 barrels of oil a day sitting in idling cars. Elsewhere in the economy inflation soared to 11.35%. The price of gas, which had only gone up by 40 cents in the previous 30 years suddenly shot up 30 cents in one year. A movie ticket still only cost $2.50 though, so you could definitely load up on popcorn and candy!

The economy might have been on shaky ground in 1979, but the TV and Movie Industries were going strong. Kramer vs. Kramer was the highest-grossing movie of the year, and absolutely crushed it at the Oscars, racking up best picture, director, actor, and supporting actress. Not too shabby. Apocalypse Now, a heartbreaking look at the terror and absurdity of war, was released and forced America to come to grips with the reality of its most recent conflict.  A departure from previous war movies, Apocalypse Now was not a patriotic lovefest but attempted to show the horrors of war from all angles. On the small screen, 40 million people tuned in to watch Archie blow a final raspberry on All in the Family’s last episode, and the hopes and dreams of millions of kids were fulfilled when Nickelodeon became the first channel dedicated to children.

But probably the biggest development in the world of TV was the premiere of ESPN, which revolutionized the way we consume sports. Fans no longer had to wait for local-news sports segments or the morning paper – suddenly the wide spectrum of sports was available around the clock. For the first time you could watch games that weren’t local, find out the score of any game at any time, and always had a place to go for the latest sports news. We live in a world where sports are ubiquitous, and that certainly wouldn’t have been possible without ESPN’s bold leap.

Speaking of sports, 1979 was a great year to be a sports fan. The Pittsburgh Steelers cemented themselves as the team of the decade by winning their third Super Bowl in five years. The city of Pittsburgh continued its domination when the Pirates won the World Series – hopefully, they savored it because the team hasn’t won a playoff series since! The Daytona 500 became the first 500-mile race to be broadcast on live TV, an event that paved the way for Nascar to grow into the billion-dollar business it is today. But the marquee sporting event of 1979 would have to be the NCAA basketball championship game between Michigan State and Indiana State. Magic. Bird. THE two biggest basketball stars of the ’80s going head to head for the first time. They would combine to win 8 of the next 9 NBA championships, but in ‘79 they were still fresh faces striving for collegiate glory. Magic’s Michigan State eventually prevailed 75-64 in the highest-rated game of college basketball in history, and the biggest sports rivalry of the next decade was on!

In 1979 the airwaves were ruled by the music that had all the “Hot Stuff” – Disco! The year marked the high-water mark for the genre in the U.S. – at one point the top six songs on the Billboard charts were all disco. Even singers that weren’t typically disco artists were getting in on the act – Rod Stewart’s “Da Ya Think I’m Sexy” was the year’s fourth-biggest hit – which I think is very sexy indeed. But the end was nigh and an anti-disco backlash was already forming. 55,000 fans attended “Disco Demolition Night” at a Chicago White Sox game to watch hundreds of albums be blown sky-high in centerfield – an event that, while sounding ‘perfect’ in concept, quickly and kinda obviously spiraled out of control and led to a mini-riot. 1979 also foreshadowed the next twenty years of the music industry – Michael Jackson’s first solo album Off the Wall produced four top ten hits, and The Sugarhill Gang’s “Rapper’s Delight” became the first rap single to enter the Billboard top 40. But perhaps the most profound effect the music industry had this year was in the realm of technology.

1979 was the year music finally went mobile. Sony released The Walkman, the world’s first low-cost personal stereo. The Walkman ran on just two AA batteries and had a headphone jack but no speaker, a combination of portability and privacy that made it perfect for music on the go. Sony eventually sold over 200 million Walkman personal stereos, and it paved the way for everything from iPods to the hilariously bad Zune. Another major technological development of 1979 was the invention of the CD-ROM. The CD-ROM was originally made to store music, and within ten years CDs had become the method most people used to listen to their tunes. But in addition, the CD-ROM was instrumental in the computer revolution, becoming the best way for scientists to distribute data and software, and helping computers take over our lives. 1979 was also a huge year for space exploration. The first working space shuttle, the Columbia, was completed and Skylab, the United States’ original space station, was purposely crashed back to Earth in a fiery explosion.

In more unfortunate news, there were several notable deaths in 1979. Former Vice President Nelson Rockefeller, punk rocker Sid Vicious, and hotel magnate Conrad Hilton all passed away. Less sad was the drowning death of a Nazi doctor, war criminal, and all-around poop-bag of a human being Josef Mengele. But the most notable passing of 1979 had to be that of The Duke himself, John Wayne. Wayne was one of the biggest Hollywood stars of the 20th century, a man who, according to one biographer, “personified for millions the nation’s frontier heritage.” From starring alongside Dean Martin in Rio Bravo to winning an Oscar while one-eyed in True Grit, Wayne was the epitome of the wild west. History may not have been kind to some of his more fringe political views, but to this day John Wayne remains America’s most iconic cowboy.

And there you have it, 1979. A year so rad, so far out that The Smashing Pumpkins immortalized it in their number one single, 1979. Tell us, what were you up to in ‘79? What is the most vivid memory from this year? Did we miss anything big? Let us know!