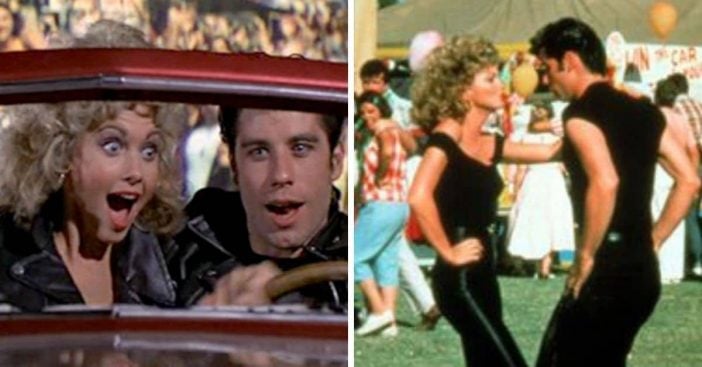 Grease is still one of the most popular musicals of all time. It has spawned many sequels and reboots, with one in the works now. However, some fans are still scratching their heads at the ending of the iconic film. Why did Sandy go through such a big change? Where did that skin-tight outfit come from? Most importantly, why did Sandy and Danny leave on a flying car?

First, let’s talk about Sandy. In the beginning, Sandy, played by the irreplaceable Olivia Newton-John, is a good girl. She is pretty quiet and dresses conservatively. Over the course of the film, she grapples with trying to figure out who she truly is. No matter what decade you grew up in, this is very relatable for all high schoolers. While some fans argue that she only changes her appearance at the end to please Danny, others say that she just discovered a different side of herself.

Why did ‘Grease’ have such a strange ending with a flying car?

She learns that she doesn’t have to be just a good girl. Her outfit represents a rebirth of sorts and a new direction for Sandy. Either way, almost everyone loves that iconic outfit of tight, black leather pants and a matching top. The most confusing part of the entire movie is at the very end when Danny and Sandy fly away in a car.

It is strange because the rest of the movie is pretty normal. Nothing out of the ordinary happens, especially something like a flying car! However, do you remember when the shop teacher says, “If it were in any better condition, it would fly.” The real reason the car flies off represents that Danny and Sandy are flying into the sunset for their happy ending.

Some fans have theorized that Sandy actually dies and the entire movie is a fantasy while she is in a coma. They say that the end is Sandy going off to Heaven. However, the creator of Grease, Jim Jacobs has confirmed that the theory is not true. Now, there will be a prequel movie called Summer Lovin’ that should debunk this theory once and for all.

Click for next Article
Previous article: Family Says Woman’s Plan To Keep Future Wedding Dress Is “Selfish” — Do You Agree?
Next Post: Check Out The Never Before Seen ‘Ghostbusters’ Promo From The ’80s