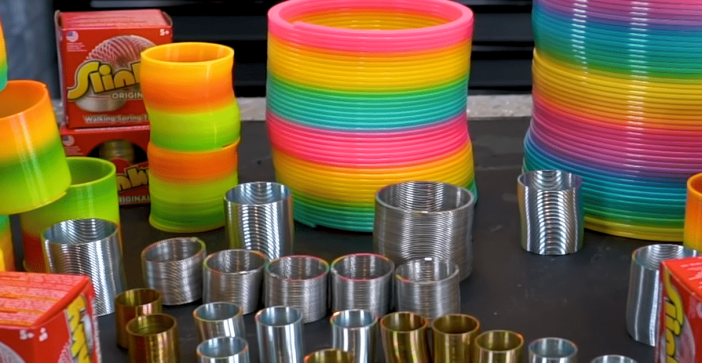 Happy accidents do happen. And when they do, a lot of people win. Often, this happens when a preexisting item gets totally repurposed. Such was the case for one of the most classical, beloved, simple toys that still endures. The slinky came from a totally different purpose than making a fun toy.

Mechanical engineer Richard James had no intention of building something fun for kids to ogle at for hours upon days upon weeks. Instead, he wanted to make a useful tool for a branch of the military. Several mathematical equations later, he noticed a unique occurrence, and so the slinky was born.

The slinky sprang to life by accident

When Navy ships sail through treacherous, rocky waters – or even calm ones – they face a problem. Equipment risked rocking right off where they stood or got stacked. Richard James, a mechanical engineer, took up the task of designing a way to secure this cargo.

RELATED: The Game of Clue Was Made To Combat WWII Air Raid Blackout Boredom

After dropping some of the coils he worked with, James turned in time to see the coil tumbling end over end across the floor. Instead of dismissing it as clumsiness, he watched and thought. Then, the lightbulb went on…for toymaking, at least. Betty James, his wife, became the first to hear about this when the engineer arrived home again. She encouraged his interest with intrigue of her own.

Betty consulted a dictionary to find a word for this new creation of theirs. Remember, until this point, springs remained part of the worlds of engineering and material science. The item had more math formulas associated with it than descriptions of some fun trinket. However, Betty did find “slinky,” defined as “sleek and sinuous in movement or outline.”

And so 1943 saw the accidental birth of a real hit. Armed with this new invention, husband and wife formed James Industries to manufacture the product. During their advent, slinkies started priced at $1. Unfortunately, the cost of materials made this go up. Nevertheless, people paid what was asked. Though, they did not need to pay much for long, as Betty, who later became president of the company, adamantly wanted poorer customers to get to enjoy the slinky too. Did you have fun watching these toys travel?