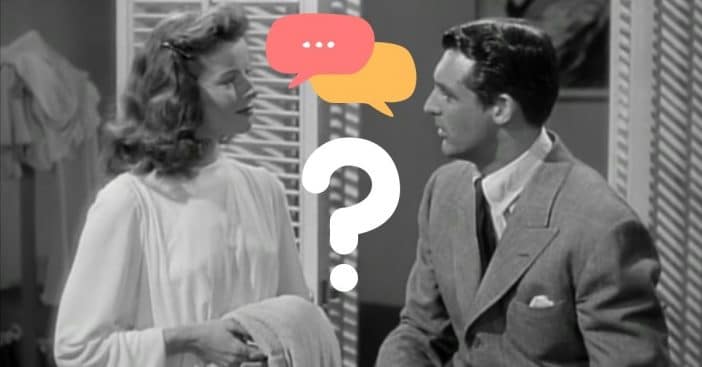 Watch a typical American film today and then watch a classic American film from the middle of the 20th century. A few stark differences should stand out. Films such as those reflect different fashion choices, gender roles, and technological capabilities. But another difference stands out as soon as an actor opens their mouth: that classic old movie accent. Actors from the old classic movies sound very different from actors today. Why? There’s actually an explanation for that.

All of it essentially boils down to education. Actors must train a certain way to master their craft. Speaking lines aloud in a believable way takes more than people might realize. But along the way, many in Hollywood learned a certain speech pattern that permeated old movies and gave them a sort of standard accent. For an example, see the video below of Katharine Hepburn in Philadelphia Story (1940).

Years ago, an actor’s training and background almost more closely resembled theater than movie acting as we know it today. During the ’40s and the decades around that time, it was audible in that familiar old movie accent people had. What viewers hear is the Transatlantic accent. This accent became synonymous with the upper class and with theater productions. In fact, No Film School writes, affluent New England schools taught students this accent.

In this way, the Transatlantic accent became very unique. It did not evolve organically overtime but rather was obtained, created, and manually spread. The accent manifests as what Open Culture calls “quasi-British elements.” Soft Rs, sharp short Ts help define this mannerism.

The old movie accent is primarily the Transatlantic accent or mid-Atlantic accent for a good reason. Speech patterns like this ended up helpful for none other than radio communicators. Radios at that time offered very little bass, low-frequency tones that make up a large part of speech and musical sounds. As the technology improved, the need to compensate what speakers like this lacked depleted.

Supply restrictions also shaped speech patterns in old movies and thus formed the accent as we hear it with our modern ears. Compared to actors today, actors from old movies seem to talk quickly. Well, that had utilitarian purposes. Film could get very expensive, eating away at a film’s budget that might not yield a profit if enough gets wasted. Fortunately, the Transatlantic accent favored so much by actors for its ties to aristocracy allowed for fast speech. Talking fast meant using less film. Clear, enunciated syllables already present, they could speak quickly and still be understood.

Click for next Article
Previous article: Elvis Presley Gave This Important Advice To Elvira And Changed Her Career
Next Post: Dolly Parton Admits She Looks Fake But Says Her Heart Is As Real As It Gets