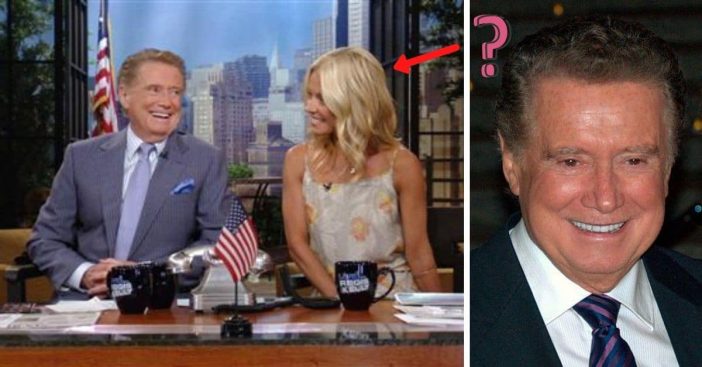 A tribute show for the late Regis Philbin has been suddenly canceled from ABC and people are looking to Kelly Ripa to see if she is behind this decision.

“Regis gave Live with Kelly and Ryan a massive 19 percent ratings bump the week that started and ended with special tributes to his passing. Monday saw Kelly and Ryan Seacrest getting emotional over the death of the man that invented their show. Friday’s episode was a repeat of Regis’s last episode ever from 2011 when he said goodbye to Kelly and the show he loved. Yet, even after proving he is still the ratings king even when he isn’t around anymore, the tribute has suddenly been pulled,” sources tell OK Magazine.

Is Kelly Ripa the reason behind the cancellation of the tribute show?

The inside source continues, “ABC owns hours of footage of Regis and it would be very easy and cheap to edit together a show of his greatest hits, but for some reason, it’s no longer happening. Inside the building everyone is looking at Kelly and wondering if she stopped it.”

According to OK Magazine, though, insiders say that Kelly loves the good ratings more than she ‘dislikes’ Philbin. While they seemed to have a great connection on their talk show together, Kelly was apparently pretty upset that he left in 2011. “I left and I think she resented that. I mean, that’s how I feel about it,” Philbin says back in 2017. “And I’m sorry because I wasn’t trying to dive from her, but I was a little tired, you know. And I was just turning 80, so I gotta get out of there.”

Sources also say that Kelly was not on speaking terms with Philbin prior to his passing earlier this year. “Towards the end of his life, Regis was very honest about his nonexistent relationship with Kelly. He had tried contacting Kelly several times, but she never replied,” a source explains.

“Kelly is notoriously stubborn and holds a grudge like no one else. Once she feels slighted, Kelly cuts people off for life. Now it is too late for her to reach out to Regis and show a little kindness.”

However, despite not being on speaking terms, Kelly did post a tribute to her former talk show host following the news of his death. “We are beyond saddened to learn about the loss of Regis Philbin. He was the ultimate class act, bringing his laughter and joy into our homes everyday on Live for more than 23 years. We were beyond lucky to have him as a mentor in our careers and aspire everyday to fill his shoes on the show. We send our deepest love and condolences to his family and hope they can find some comfort in knowing he left the world a better place,” she writes at the time.