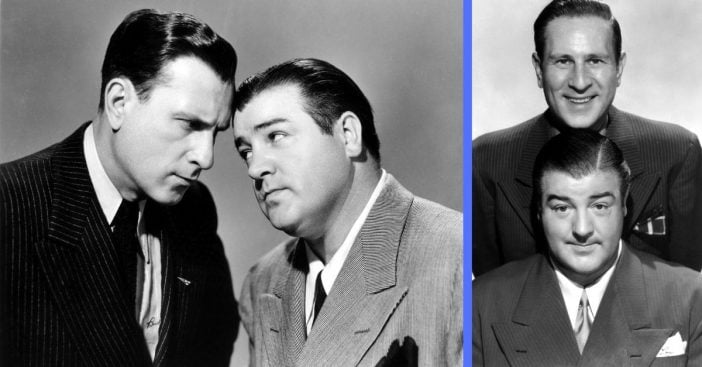 Bud Abbott and Lou Costello’s venture would involve a team-up with Dracula, The Wolf Man and Frankenstein’s Monster. This had Costello thinking otherwise. “No way I’ll do it,” Costello told the head of the motion-picture studio. “My little girl could write something better than this.” $50,000 in salary and the signing of Charles Barton directing the picture convinced the comedian him enough.  Abbott and Costello Meet Frankenstein became the highest grossing movie of their career and Lou Costello later recalled, “they were right, I was wrong.” Sequels involving The Mummy and The Invisible Man followed soon after.

Today, fans of Abbott and Costello appreciate the numerous motion-pictures available commercially on DVD. This includes the boys’ first film, One Night in the Tropics (1940). Their second film, Buck Privates (1941), grossed an estimated $10 million – not bad when you consider the budget was $180,000.

The due started in Vaudeville and by the fall of 1942, the boys had their own weekly radio program and topped the popularity polls of Radio Daily and Radio Guide.  Their popular “Who’s On First?” routine made them a national sensation.  In March of 1943, Costello is experiencing rheumatic fever.  Bud Abbott refuses to perform without his partner, so Jimmy Durante and Garry Moore replace the duo. Then, on the afternoon of November 4, 1943, during rehearsals for the evening’s broadcast, Costello received a call from home – his son, Lou, Junior, accidentally drowned in the family swimming pool. The comedian rushed home to discover the news was accurate as reported.

Word spread through Hollywood and numerous radio comedians volunteered to fill in for Costello that evening. Bob Hope, Jimmy Durante and Red Skelton. To the surprise of everyone in the studio, Lou Costello returned moments before airtime and went before the microphone to deliver his lines as scripted and rehearsed earlier in the day. Guest Lana Turner found it difficult to deliver her lines on the air while Lou Costello pushed back the tears… momentarily. Towards the end of the broadcast, Lou broke down and Bud Abbott explained to the stunned radio audience the horrible news.

Do you miss listening to vintage radio programs?

We are excited to have a sponsorship with Classic Radio Club! All of us at DYR proudly promote Classic Radio Club for their vintage radio programs being readily available and in the most premium, high-quality sound. All DYR readers will receive 10 of the greatest classic radio shows of all-time for only $1! Be sure to check out Classic Radio Club for more information on this amazing deal. Back to regular programming…

The Bud Abbott and Lou Costello Show ran for seven years until the summer of 1949. By then filming was complete for Abbott and Costello Meet the Killer, Boris Karloff. Lou Costello is in bed for several months due to a relapse of rheumatic fever. This is a health ailment he experiences back in 1943. His illness prevents ABC from renewing the contract for an additional season on radio.

Bud Abbott and Lou Costello will always be remembered

Soon after Bud Abbott and Lou Costello went to Mars and faced off against Dr. Jekyll and Mr. Hyde, the boys ventured into the television business. Produced by Costello’s wife, Patricia, the television series lasted two seasons. This gave the boys an opportunity to reprise the best comedic sketches and scenarios from their radio scripts. The next time you watch one of their television programs or watch one of their big screen movies, remember that flat sarcasm of Bud Abbott and shrieks from Lou Costello originated on the radio – the perfect medium for verbal standup that is often imitated today at fan gatherings… sans the Frankenstein monster.

Do you remember classic radio shows such as The Jack Benny Program, Gunsmoke, and Inner Sanctum Mystery? We’ve partnered with The Classic Radio Club to bring you this article on Bud Abbott and Lou Costello’s radio career!

Receive 10 of the greatest radio shows of all-time as a DYR reader for only $1 – This direct link to Classic Radio Club will save you the search, sign up today!