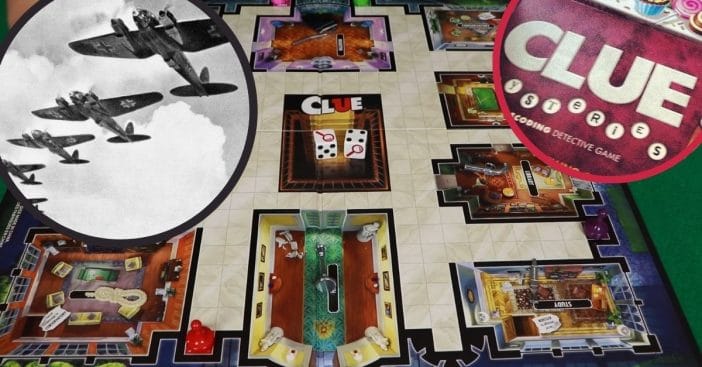 It was Anthony E. Pratt, in Britain, with a board game! Today, family members and friends flock around a board, taking attentive notes and hoping their opponents’ cards hold the answer to a murder mystery. But the game of Clue has very different origins from where it is now. Musician-turned-game designer Pratt made the game to combat boredom…during very serious times.

When the Germans set their sights on Britain, they bombarded the country with air raids that did not discriminate between civilian and military targets. To make the job harder, Brits underwent intense blackouts. Though fear factored heavily into their lives, they also knew a sense of monotony in the dark. Pratt changed that.

Anthony E. Pratt had an ear for murder mysteries

Born on August 10, 1903, Anthony E. Pratt called Birmingham, England home for much of his life. His education and interests varied greatly; he loved chemistry but bad eyesight damaged his schooling experience. He possessed a natural talent with the piano and many considered him a gifted musician overall. The two interests pulled him in opposite directions until finally, music won out. He indulged in this passion for several years as his career, though when WWII unfurled around the globe, he worked in the UK to help manufacture tanks. The monotony of the job made for dull work, but allowed his mind to wander.

RELATED: Everyday Items That Were Designed Originally For WWI

During that busy free time, Pratt reflected on the murder mysteries he loved to see play-acted in the mansions he played piano in. He adored watching the plots unfold and engage his wit. Typically, play-acted murder mystery games like that had the house’s occupants and guests using many rooms and playing designated roles. But blackouts during WWII limited the logistics behind this. People needed to be bunkered down in their own homes or flats while not letting full room lights blare out the covered windows. To work around this, Pratt devised a board game to allow a similar experience in a safe manner that gave Brits something fun to do while they waited through the dangerous, dull nights.

By December 1, 1944, Pratt got to file his first patent for what would become Cluedo (known as Clue in North America). He developed the suspects and murder weapons between 1943 and 1945, in part thanks to his experience at that monotonous but helpful tank factory. The game board’s first design players can thank Elva, his wife, for. She heavily contributed to its look by working on it over their dining room table. The first iteration Brits played was known as Murder!. After the war, Pratt acquired an official patent for Cluedo. But that wouldn’t be the last evolution Pratt’s game would go through.

The game found its way to the States and into the possession of Hasbro. It was able to get a lot of steam around this time, since postwar shortages still dogged Britain and prevented Cluedo from really kicking off. But even though what we know as Clue went through some changes, we can see a lot of similarities too. For instance, Pratt’s original design included characters named after colors. Some titles changed a bit; for example, Colonel Yellow and Nurse White became Colonel Mustard and Mrs. White. But the sentiment behind his creations of Miss Gray, Mrs. Silver, Mr. Brown, and Mr. Gold still stand. Original weapons really show Pratt’s knowledge of weaponry, as they included a bomb, syringe, fire poker, and more. No matter the alterations, Clue continues to combat boredom to this day. Who do you usually play as?