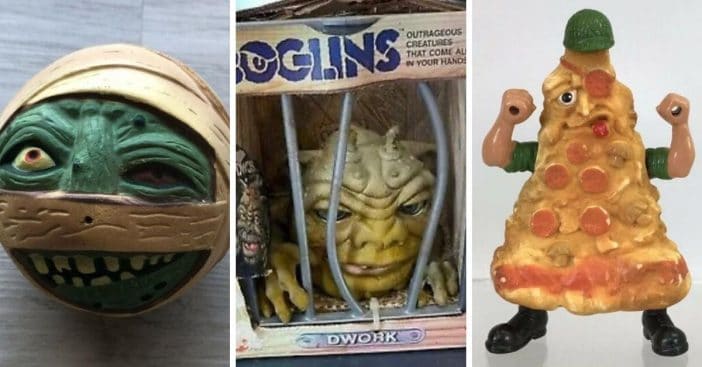 The ‘80s were a time when many kids were begging for awesome action figures like He-Man and Transformers. These popular toys are still really well known today. However, many toys of the ’80s strayed a little further off the beaten path. They delved into the world of gross-out humor and creative strangeness to create a slightly different genre of toys.

Action figures and toys marketed towards boys were often made to be gross, creepy, or just plain weird. This only added to the fun of these unique toys and sometimes girls even ended up loving them too. Do you remember any of these gross or weird toys from the ’80s?

“Gross for one, gross for all!” Madballs are pretty much what they sound like – bouncy foam balls with creepy, disgusting faces. Originally created in the mid-1980s, Madballs featured characters such as Screemin’ Meemie and Slobulus. These toys became a fad and a collectible item.

RELATED: 13 Toys From Your Childhood That Were Actually Pretty Odd

Apparently Madballs were popular enough to be revived in the 21st century with all new characters and merchandise. The characters have always been pretty creative despite their gross appearances. Plus that catchy jingle was sure to get stuck in someone’s head.

Food Fight! These awesome, weird action figures were created by Mattel in the late ’80s. A literal take on the food fight, each character was a militarized version of food come alive. Equipped with weapons and combat gear, the Food Fighters were evenly split into rival groups.

The good guys were known as Kitchen Commandos. They featured characters such as Burgerdier General and Major Munch, a wide-mouthed doughnut. The Kitchen Commandos enemies were called Refrigerator Rejects. These toys included Mean Weener (a hot dog), Chip the Ripper (a Cookie), and more. Apparently healthy foods were not allowed to be Food Fighters.

Originally distributed by Mattel in 1987, Boglins were goblin themed rubber puppets. Created by Tim Clarke, these puppets really look like they could be on the set of The Dark Crystal. The interesting name presumably comes from the natural terrain of Boglins (bog) combined with the word goblins.

Boglins packaging added to the fun. They came in boxes that looked like a wooden crate with bent bars in front, letting you know your Boglin was dying to get out and wreak havoc. The first release of Boglins included three different characters named, “Dwork” “Vlobb” and “Drool.”

Even though the Garbage Pail Kids were a series of sticker trading cards rather than toys, they still deserve an honorable mention on this list. Garbage Pail Kids were produced by The Topps Company in 1985 to parody the wildly popular Cabbage Patch Kids. Whether it was due to the gross characters or the mass popularity, GPK cards were often banned on school grounds for being too distracting. Garbage Pail Kids are celebrating their 35th anniversary in 2020 and new cards are still being made today.

Previous article: This Is Why Some NY Apartments Had Bathtubs In The Kitchen
Next Post: What Barbra Streisand Is Doing To Spark Romance With Husband James Brolin