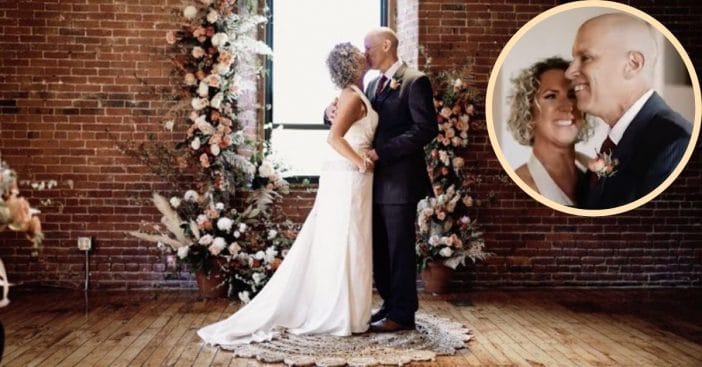 Peter Marshall, 56, suffers with early onset Alzheimer’s, which has caused him severe memory loss. As a result, he sometimes forgets his wife Lisa is, in fact, his wife. But he knew enough that Lisa was his favorite person and had no qualms when he proposed all over again.

Lisa, in turn, could not say no to such a gesture, just as touching the second time around. Though his condition has worsened over time, Lisa not only stuck around but readily agreed to continue doing so. Read more of their unique story here.

Alzheimer’s rid Peter Marshall of his first proposal, but he’s willing to do it again

Peter Marshall has early-onset Alzheimer’s. He’s been married to Lisa for 12 years, but "[h]e doesn't know that I'm his wife. I'm just his favorite person." Watching a wedding on TV, Peter was inspired to ask Lisa to marry him—again. H/T @GiancarloSopo https://t.co/VHMqhdANvL

Connecticut resident Lisa Marshall recalled how she and Peter were watching the TV and they saw a wedding scene on the screen before them. It was at this point, Lisa shared, that her husband pointed to the television and said to her, “Let’s do it!”

RELATED: Shoes With GPS Insole Allows You To Track Loved Ones With Alzheimer’s Or Dementia

“I said, ‘Do what?’” Lisa went on. “And he pointed to the TV, to the scene of this wedding and I said, ‘Do you wanna get married?’ He said yes and had this huge grin on his face. He doesn’t know that I’m his wife. I’m just his favorite person.”

“Thank you for staying”

After being diagnosed with early-onset Alzheimer’s, Peter Marshall forgot his wife's name and their wedding day, but not how much he adores her.

In fact, Peter realized all over again he wanted to be with his favorite person forever. So he proposed — for the second time! pic.twitter.com/u10Bl7TLNZ

Going through these motions with Peter hasn’t deterred Lisa; in fact, she felt, “I’m the luckiest girl in the world. I get to do it twice.” Of the event itself, she recalled, “It was so perfect. I couldn’t have dreamt for a better day. It was so magical. I can’t remember seeing him so happy for so long. He was so happy.”

Peter Marshall himself can no longer recall this sequel wedding due to his worsening Alzheimer’s condition, but he still feels Lisa is his favorite person; that feeling lives untouched in his heart because, as he puts it, their “hearts are connected.” And though he can’t recall their second wedding, he understands what they have, enough to tell Lisa, “Thank you for staying.”