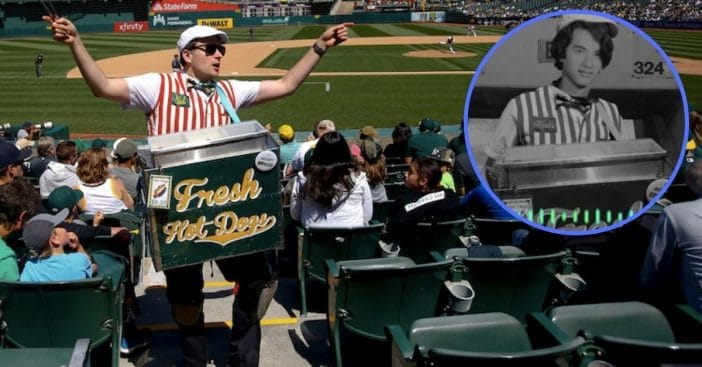 Amid MLB season, Tom Hanks returns to his childhood job of selling hot dogs at Oakland A’s games… but there are no crowds there this time due to the pandemic. The 64-year-old used to sell hot dogs and peanuts at these games when he was just 14. He was that guy walking up and down the stairs, yelling out to see if anyone wanted to purchase these snacks while watching the game from the stands.

The MLB season is continuing on despite new restrictions, including placing cardboard cutouts in seats and using old audio to give the illusion of a crowd. Hanks is playing a large role in this as well, lending his voice to “sell” those hotdogs once more.

The Oakland A’s announced that fans will be able to hear the actor’s voice selling hotdogs to imaginary people, but they will also have a cardboard cutout of him in a red-and-white striped vest. Definitely a creative way to create the illusion of a true baseball game!

“Life is like a box of… popcorn,” the team tweets last week. “East Bay’s own @tomhanks is reprising one of his first roles as a Coliseum vendor! See if you can hear him mixed in with the crowd noise during tonight’s #OpeningDay broadcast.”

Hear the audio they will use

East Bay's own @tomhanks is reprising one of his first roles as a Coliseum vendor! See if you can hear him mixed in with the crowd noise during tonight's #OpeningDay broadcast.#RootedInOakland pic.twitter.com/o84TzuTLiX

The tweet also comes with a recording of Hanks’ voice. He’s shouting out things like “It’s not a ballgame without a hot dog!” and “Hot dogs here! Colossal hot dogs!” This audio was first featured during Oakland’s Opening Night recently, so it’s already in motion. Hanks actually spoke about his time doing this job back in the day in 2019 on Jimmy Kimmel’s show.

“I went down to sell peanuts and soda, and thinking it would be like in a TV show where you saw the young kid trying to make a thing,” he explains. “Well, first of all, I got robbed twice. Note to self: Hide those wads of cash. Don’t be walking with a wad of cash in your pocket.”

Hanks also reveals that a lot of the professional vendors there didn’t like that there was a 14-year-old kid trying to sell hot dogs. “I came across professional vendors, who did not like the fact kids were there. I’m 14 years old and a guy, probably in his late 50s, is yelling [at me], ‘Hey, kid, that was my sale!’”