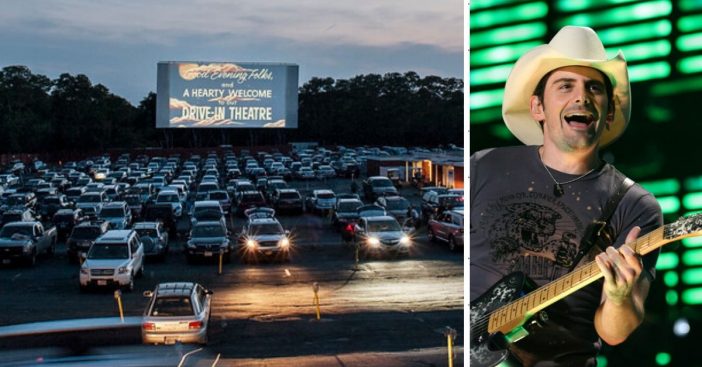 Most concerts are not happening this year. As many artists have canceled or postponed their tours, some are shifting to drive-in shows. Garth Brooks recently shared a live stream concert for hundreds of drive-ins across the country. However, fans were disappointed because it was not actually a live show, but a video.

The website Live Nation is starting a new series called “Live from the Drive-In.” It will feature live shows that you can watch from the safety of your own car. The first series will feature country artist Brad Paisley. There will be special performances by Darius Rucker and Jon Pardi in Nashville, Nelly and El Monstero in St. Louis, and Jon Pardi and Yacht Rock Revue in Indianapolis.

As of now, the concerts are only available for a short time in three cities. See the list below and remember that one ticket is good for four people in your car. Each venue will focus on the safety and health of workers and those enjoying the concert. They are limiting four people to a car and the cars will be socially distant.

Live Nation released a statement that read, “Our ultimate goal is to connect fans with artists to create those lasting memories, and we have teams around the world exploring unique ways to make that happen. There’s not a one-size-fits-all approach to drive-in concerts, but we’re fortunate to have our venues and logistics in place to ramp these shows up quickly as communities are ready. Artists and fans are having fun with them, and employees and crews are glad to be working some shows, so for us, it’s a win all around.”

Would you like to attend if they are coming to a city near you? Click here to buy tickets!

Click for next Article
Previous article: Ringo Starr Planning 80th Birthday With Some Help From Friends
Next Post: This Is How Old Sandy & Danny Are Compared To Their ‘Grease’ Actors