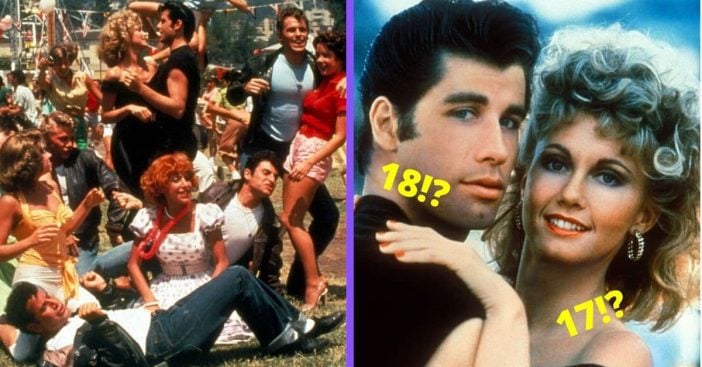 The 1978 musical movie Grease starred John Travolta and Olivia Newton-John in the film’s leading roles. The couple, along with the rest of their gang of the Pink Ladies and T-Birds, all attended Rydell High School. The movie followed these high schoolers through their adventures of growing up, love and romance, and just being a teenager.

However, the actors of these beloved characters were much older than a high school teen. While watching it at a young age would just pass by you, it’s easy to see how much older they are in the film. It’s even pretty hard to look past the fact that 18-year-old T-Bird Sonny was actually played by 31-year-old Michael Tucci. Additionally, Pink Lady Rizzo, also 18, was played by 33-year-old Stockard Channing!

Sandy and Danny may have passed the age test in ‘Grease,’ but they were much younger than Newton-John and Travolta

RELATED: Can You Believe Sonny In ‘Grease’ Was Supposed To Be A Teenager?

Grease is not the first or only movie to cast actors that are much older than the characters they’re portraying. This is not an oversight in production companies that cast actors, but more of a convenience. It relieves directors and producers from child labor laws and also avoids the event of the child/teen actor growing out of the role.

Grease has continued to be a classic in the film industry. Although Grease 2 went under the radar, Paramount Pictures is currently working on a prequel called Summer Loving. There’s also a spinoff called Rydell High coming to HBO Max soon. We wonder how they’ll end up casting age-wise for these spinoffs, especially for Sandy and Danny!