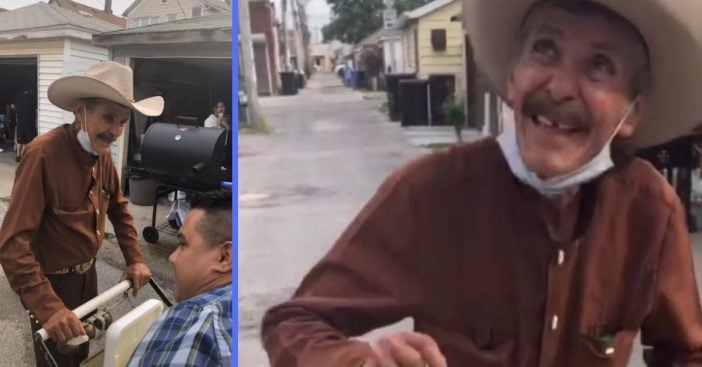 At 70 years old, Don Rosario sells ice pops from his ice cream truck in a Chicago neighborhood. He even worked on Father’s Day. His shift on that holiday ended early, however, when a few kind strangers stepped in. At first, they just wanted Rosario to have the chance to head home early and enjoy Father’s Day. But their next step to help him resulted in so much more.

After buying the rest of Rosario’s stock, the family members wanted to give the elderly man a boost towards retiring. To do this, they set up a GoFundMe. Originally, the duo, comprised of Michaelangelo Mosqueda and Karen Gonzalez, set a goal of $10,000. Not even they could have anticipated the amount of support that would pour in.

Working at 70 years old already shows Don Rosario’s determination. But the conditions he works in can really cause alarm. Rosario has been pushing around a vending cart for 50 years. He sells paletas, Mexican-style ice pops, writes Little Things. That includes in the summer sun and among those looking to take advantage of a vulnerable vendor.

“It can be very dangerous for paleteros or anyone out in the streets, we have heard of many that have been attacked by people just to get a couple of hundred dollars from them and seeing this 70-year-old man out on the streets we knew that we had to help him out,” explained Karen Gonzalez. So when she and Michaelangelo Mosqueda encountered him during their otherwise typical pleasant day, they wanted to help. Mosqueda took a video as he and Gonzalez bought out Don Rosario’s paletas. The video went on TikTok, showing everyone the delighted shock Rosario expressed. But that was not enough, and their next move came from a very personal place.

Support pours in through GoFundMe

“My grandfather just finished retiring this past year and to see Don Rosario out there pushing the cart day in and day out, we just felt like we needed to do something for him,” Mosqueda explained. So the duo put together a GoFundMe campaign with a goal of $10,000, supplemented by the video and explanation of Rosario’s situation. In under 24 hours, they not only met their goal; they raised $39,305 for Rosario.

Almost $40k came from over 40 states. Seeing this national support left Gonzalez and Mosqueda “speechless.” Mosqueda added, “It has been really eye-opening to see that when we all come together we do some great things for others.” Currently, the fundraiser is closed, but the two hope to open it again. Mosqueda, who is the go-between for GoFundMe officials and Don Rosario, explained, “This amount of money will allow him to be more comfortable and he won’t have to worry about the day-to-day expenses of life.”

Click for next Article
Previous article: College Graduate Sings National Anthem, Complete Stranger Joins Her In Unity
Next Post: Veteran Musicians Talk About Not Being Able To Tour This Summer