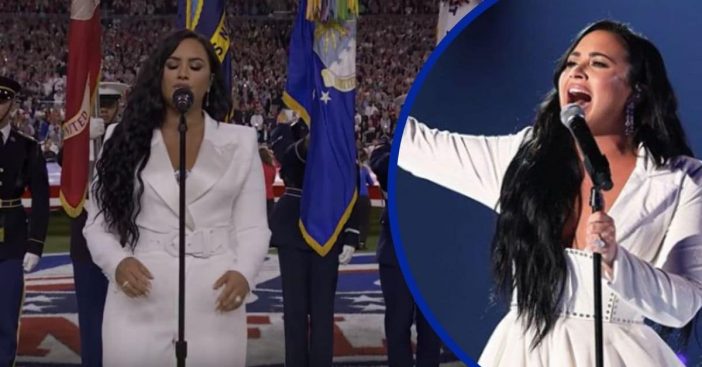 Singer Demi Lovato performed last night at the 2020 Super Bowl and it was nothing short of amazing. This performance, in particular, is one of her first few live performances since she took some time out of the limelight due to her 2018 overdose. She also recently performed at the 2020 Grammys and earned a standing ovation there. If you ask us, she sounds absolutely incredible for both performances!

Demi confirmed the news that she was singing at the Super Bowl in a post on Instagram. She admits that she’s nervous, especially compared to singing at the Grammys. “The national anthem, if I mess up, everyone goes after you if you do. I’m not going to read the comments, so it won’t matter. But it’s just one of those things where it’s like—there’s so much pressure on the national anthem. When it’s my song, if I mess up a lyric, nobody would’ve known because it wasn’t out yet.”

As previously mentioned, this was one of the first live performances since her 2018 overdose. Back in 2018, she made headlines after being rushed to the hospital for a drug overdose. She had been sober for 6 years prior to that moment but confessed in a newly written song (at the time) “Sober,” that she had relapsed. Following her hospitalization, she was in rehab for a while and has since returned to continue her sobriety journey.

After the incredible Super Bowl performance, her fans are understandably going nuts.

Demi Lovato was the best part of the whole #SuperBowl. Yes, I’m aware the game hasn’t started yet.

Demi Lovato is a natural talent. Wow just wow that was beautiful 🤍 #SuperBowl

“Demi Lovato is a natural talent. Wow just wow that was beautiful,” another Twitter user writes.

To see the incredible performance for yourself, check out the video below.