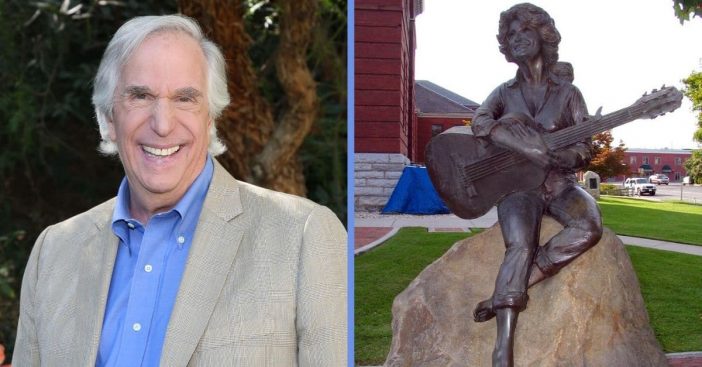 We recently reported that there was a proposal for a Confederate statue to be replaced with a statue of the incredible Dolly Parton. Henry Winkler is one of the many who has voiced his support on this. There’s been a lot of talking going around about the removal of racist historical figures. Many statues have been removed or are in the process of removal. Others were vandalized or torn down completely by protestors.

The statue in question is in Tennessee and is of Nathan Bedford Forrest. He was a general and a leader of the Ku Klux Klan. A petition went up to motion replacing the statue with Dolly Parton and has more than 18,000 signatures and counting.

“Tennessee is littered with statues memorializing Confederate officers. History should not be forgotten, but we need not glamorize those who do not deserve our praise. Instead, let us honor a true Tennessee hero, Dolly Parton,” the petition reads. “Let’s replace the statues of men who sought to tear this country apart with a monument to the woman who has worked her entire life to bring us closer together.”

Besides so many U.S. citizens in favor of this idea, some unlikely people have voiced their support as well, such as Sen. Ted Cruz. “Now this seems worthwhile: replace statue of Nathan Bedford Forrest—former delegate to 1860 Democrat National Convention, vicious slave trader & the founder of the KKK—with the great Dolly Parton. A win-win!” he said in a tweet.

Lots of support for the idea may turn into action

As for Winkler, he tweeted his support in a simple sentence. “Now that is right .. Dolly is a treasure.” Another supporter includes Tennessee politician Jeremy Faison. He says, “If we want to preserve history, then let’s tell it the right way. Right now there are eight alcoves (in the Capitol). Seven are filled with white men. How about getting a lady in there? My daughter is 16, and I would love for her to come into the Capitol and see a lady up there.”

Now that is RIght .. Dolly is a treasure https://t.co/v4AiH6wWQW

In conclusion, only time will tell if we get an official Dolly Parton statue to replace these Confederate/KKK statues. What do you think of this idea?

Click for next Article
Previous article: Liquidation Sales At JC Penney Stores Around The Country Start This Week
Next Post: Doctors Said He Wouldn’t Live Past 11, This June He Turns 62