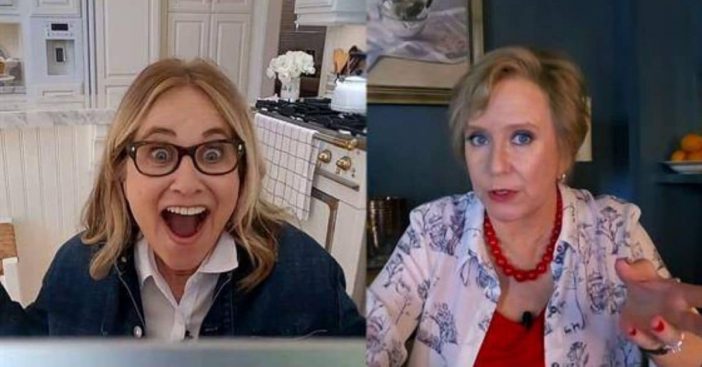 Maureen McCormick and Eve Plumb, known best as The Brady Bunch‘s Marcia and Jan, are making moves to take over the designing world. Following the success of 2019’s A Very Brady Renovation, the two are now remotely helping families with their misused space in Design at Your Door on HGTV.

The show is entirely self-taped, making it a unique show in its own right. “I think probably the biggest challenge was not being able to touch anything, actually. I have bought a lot of stuff online. I bought a lot of furniture online, put it together myself and that helps a lot. It would have been more helpful to be able to touch everything, but it’s almost like you have an interpreter because then they can see it and touch it and they can tell you, ‘Yes this works. No, it doesn’t.’ So, there’s always a workaround,” Plumb tells E! News.

More info about ‘Design at Your Door’

McCormick also opens up about her experience with the show. “I think for me, the craziest thing [was] I had never zoomed in my life before this show. So, it was not in my reality at all and it was just bizarre! Seeing all of these heads on the screen was just crazy,” she says.

She continues, “To not be in the space with the family…was crazy. The family that I was working with just really embraced this whole concept so much, they were so welcoming and so loving that I really did kind of feel like I was there with them.”

A welcoming new network of people

Because McCormick and Plumb were both so well-known being part of The Brady Bunch, they were welcomed into this new avenue of the arts very easily. “They were very welcoming and trusted me, which is great. Because that’s one of the main things you need as a designer is somebody to trust you, because you’re going to say, ‘Do this, do that, do this, do that,.'”

McCormick adds onto that thought. “Right. I’ve only found everybody to be incredibly welcoming and what’s really kind of crazy is they already feel, in some way, like they know me. Everyone always says, ‘Oh, you feel like you’re a part of the family.'”

A love for designing come alive

“I had it in mind because you know, doing designing on TV is like my dream job,” Plumb admits, adding that she’s a big fan of Nicole Curtis and Rehab Addict. “To be able to do this is an absolute dream job for me because it’s something I just love so much. I love to work with textures and colors and perspective and get that whole design feel that that comes from the macro to the micro, from the very big pieces of the various small touches that has a through line through it. And to get to do it for such nice people and to get to do it for HGTV, I tell you, it couldn’t have happened at a better time than when I was panicking about the state of the world. [Laughs.]”

McCormick adds that she also loves designing and the entire network as a whole. It will certainly be very exciting to see Marcia and Jan back at it again, except they’re helping to design homes for others! Design at Your Door airs Thursdays, 9 p.m. on HGTV.