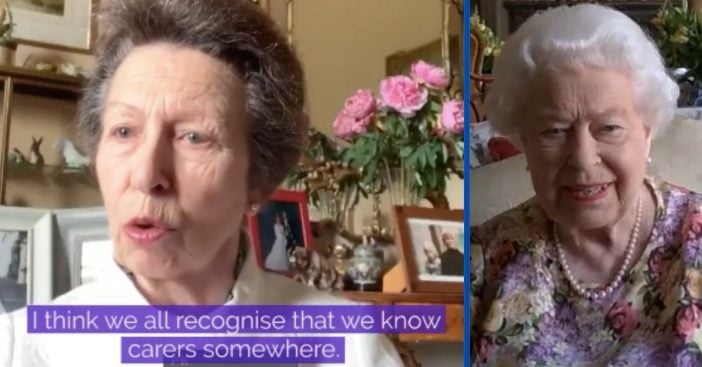 Queen Elizabeth II does not often go public in videos, but it looks like recently, she has been getting into it! She has recently taken part in a public video call with her daughter Princess Anne. In the video call, they salute unpaid caregivers who do the most for their communities and families. The video was released by Buckingham Palace, where the two talked about their own personal experiences.

“Interesting listening to all your tales and stories. I’m very impressed by what you have achieved already,” says Elizabeth. “I am very glad to have been able to join you today.” They both were taking part in Carers Week, which highlights the work of seven million people across the UK.

The half-hour video call included not only the Queen and Anne, but also Alex, Amna, Mary, and Nadia, who are all the primary caregivers for family members. Also present was the chief executive of the Carers Trust, Gareth Howells.

RELATED: How To Be A Motivational Caregiver Without Unintentionally Bullying

“Her Majesty was very keen to understand the stories of each of the carers. She shared a lot and asked questions about the support they are currently getting as unpaid carers. She was keen to understand how the coronavirus has impacted them as such,”  Howells says to PEOPLE. “It was a real privilege. The Princess Royal has long been a supporter of the Carers Trust and is always passionate and knowledgeable about unpaid carers. But to be able to have the greater profile of Her Majesty joining the call as well, to raise the awareness of unpaid carers during Carers Week, was really crucial.”

Howells continues, “The carers were nervous enough to have the Princess Royal but to be told a few days before that Her Majesty would be joining us was really nerve-wracking but they loved the unique opportunity to raise the profile of carers across the U.K. as well.”

“It was a really useful discussion. All of them were surprised by the engagement. They weren’t just there to get a photo opportunity. It was good to see the Royal Family take an interest in such an important piece of work.” What a beautiful salute to caregivers, not only just in the UK, but across the globe! Check out footage of the call below.