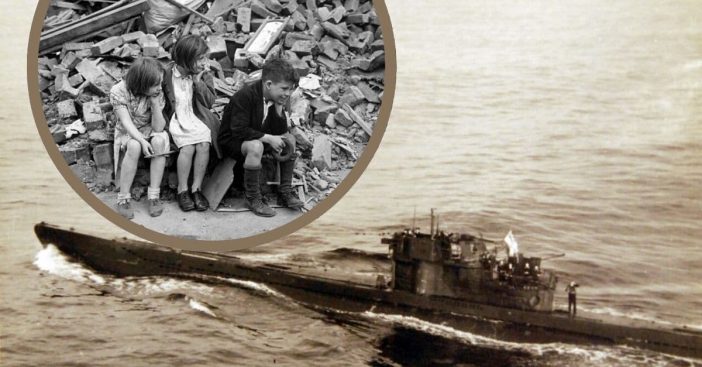 With each passing year, fewer remain with firsthand memories of World War II. But humanity has many accounts chronicling the countless tragedies that riddled this dark period in history. The lost children of 1940 stand as a heartbreaking example of the ways conflict upends a child’s life. And if battle does not outright take a life, it can steal a childhood in a traumatizing way.

Through times of war, children are innocent parties with long, full lives still ahead of them. They are also among the most vulnerable, and whether as deliberate targets or collateral damage, their innocence does not make them invincible. So, as air raids rained down on Britain, officials wanted to keep the youngest citizens safe. To do that, they arranged for children to be safely transported out of Britain, so in-range of Luftwaffe bombs. But to get the children abroad, ships had to travel through waters that played host to German U-boats that treated any vessel as a target. Including the ones transporting children.

In late June, Under Secretary of State for Dominion Affairs Geoffrey Shakespeare addressed the topic of securing the safety of Britain’s children. They had no part in the war, did not participate in the front lines. But they found themselves within firing range of Germany’s Luftwaffe, as the aircrafts dropped bombs that could level entire buildings night after night indiscriminately. Under Secretary Shakespeare, thus, created Children’s Overseas Reception Board (CORB). CORB was responsible for arranging children’s relocation to live with relatives overseas. It even got the approval of Winston Churchill. Abroad, hopefully, they could live without fears of bombs or restrictions like rations. Some children traveled within the country, far from main targets, as seen in a video below. but plenty also intended on traveling to Canada, New Zealand, Australia, and South Africa.

Within two months, over 211,000 children registered with CORB. Of these, 24,000 children had transportation arranged for them. The arrangement also had 1,000 volunteer adults traveling with them. They included nurses and school teachers to maintain the children’s health and education. All the while, the ship was to be escorted by the Royal Navy…for a time. The fleet already had wartime targets to address, so resources ended up stretched thin. This would prove fatal, as German U-boats also focused on certain targets, but with a very broad definition of what a target could be.

Many of the lost children never made it to their destination

Bound for Canada, children boarded the SS City of Benares on September 13. They brought personal belongings and necessities for the long journey, excited for an adventure and for change that did not involve worried nights. A total of 191 passengers traveled by that vessel, of which 90 were children. Manning the ship were 216 officers and crewmen. The SS City of Benares enjoyed an armed escort for a time, as promised, before the escorts had orders to join a convoy when they passed by on September 17. So, when a U-48 captained by Heinrich Bleichrodt encountered the ship transporting the children, it was an easy target.

Almost fittingly, a storm rolled in as the U-48 encroached close enough to fire multiple torpedos at the SS City of Benares. The children had learned their lifeboat locations, rehearsed drills, and knew how to properly secure their life jackets. But the worsening weather literally threw all plans off their axis. Children, volunteers, and staff alike were at the storm’s mercy as it rocked the sinking ship and lifeboats alike. Word of the attack reached the mainland and HMS Hurricane rushed to the site of such devastating wreckage. Hardened crewmen of the destroyer openly wept as they searched for survivors, mostly finding deceased but carefully carrying out any who still lived. The destroyer missed one lifeboat with weakening survivors, who ended up rescued by HMS Anthony. While survivors recuperated, the numbers finally came in. Out of 90 CORB children promised safety, 77 died. They ranged from six to 15 years of age.

Previous article: Before 1964, Seat Belts Were Just An Unnecessary Bonus Feature
Next Post: Melissa Sue Anderson Of ‘Little House On The Prairie’ Reveals Why She Left Hollywood For Good