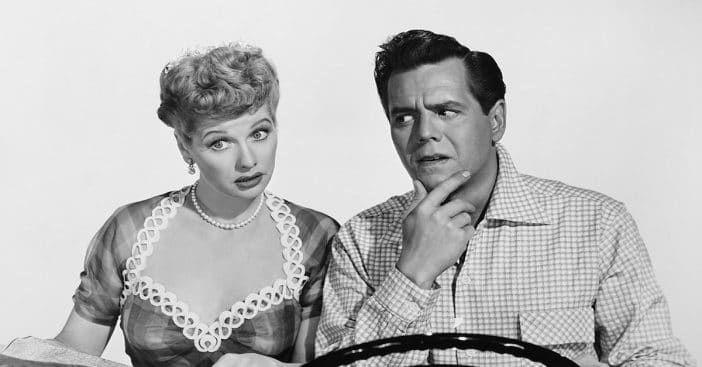 When you think of Desi Arnaz, there’s little doubt that images of Ricky Ricardo telling Lucy she’s got some splainin’ to do comes to mind. But the truth is that Desi, in the years before I Love Lucy or even meeting Lucille Ball, came from a life of wealth that was stripped away from him as his family was attacked and driven out of their native Cuba.

Desi was born into incredibly good circumstances, his grandfather having gone up San Juan Hill with Teddy Roosevelt and very influential in Cuban politics; his maternal grandfather was one of the co-founders of the Bacardi rum industry, his father was the first mayor of their town — Santiago de Cuba — his uncle was the chief of police of the town, and his father was a part of the greater political scene in Cuba.

Says singer/stand-up comedian/pop culture historian/author Geoffrey Mark, whose tomes include The New Lucy Book: A Complete Guide to Her Six Decades on Television and Ella: A Biography of the Legendary Ella Fitzgerald, notes, “Havana was the political center of Cuba back then, and Santiago de Cuba was the cultural center of the island. It’s where the music came from and all the arts centered there, not that there weren’t nightclubs and things in Havana for the tourists. But on the island, if you were creative, if you were an artist, a musician, a singer, a painter, a writer, you probably spent more time in Santiago.”

As he explains it, Desi’s family had mansions, ranches, yachts, livestock, and sports cars. “He was,” observes Mark, “born into plenty.”

That was the name Desi was born with on March 2, 1917. His parents were Desiderio Alberto Arnaz y de Alberni II , who held a PhD; and Dolores de Acha, described as a doting mother. Notes Geoffrey, “I believe Desi’s great-grandmother was deeded, by Spain, a huge portion of Southern California. Her name was Ventura Arnaz, and there is a Ventura County in Southern California as well as a Ventura Boulevard that runs all through the San Fernando Valley. There is an Arnaz Drive in Beverly Hills, not named for Desi, named for his great-grandparents because at one point they owned it.

“So,” he continues, “his family name had worth long before he ever came to this country or learned to speak a word of English, and he was being groomed for the future. It was assumed that he would go to college, to Notre Dame, and then go back to Cuba and take his place in politics as the next mayor, the next governor or the next what have you. He was also an only child, which was rare in Catholic families of those days, so he was completely doted on. His father, Dr. Arnaz, was called the model mayor and the people loved him.”

The life of Desi’s family was forever altered during the 1933 Cuban Revolution (also known as the Sergeant’s Revolt), which was led by Fulgencio Batista, who overthrew Cuba’s president, Gerardo Machado. “Desi was 16 and the family was wiped out in that their homes were burned down, their livestock were slaughtered, their ships were sunk,” says Geoffrey, “and the only way Desi was able to get out of where he was without being killed was to have someone drive him. In those days, cars had running boards and he would shout, ‘Viva la revolution,’ so that no one would shoot him. Very luckily, Desi, his mother, and father didn’t get killed, but they lost everything.”

Desi and his father managed to get out of Cuba before they could be arrested, and moved to Miami. Geoffrey details, “With the help of some people who were already in Florida, who were Cuban refugees, they were put into a warehouse where they lived with rats and roaches. That was their new home, from mansions they went to rats and roaches. Eventually, his mother came, but his parents’ marriage did not survive the trauma and they divorced. Desi’s first job in America was going to all the Woolworths in Miami and cleaning the canary cages. Then he and his father went into the tile business — at the same time, Desi was going to high school to finish at least his high school education. At one point when they were doing tiles, their shipment of tiles broke and Desi figured out that they’d sell it as a luxury product — ‘Broken tiles done in a mosaic is the new fashion.’ That was the first of the indications that Desi Arnaz was brilliant and could turn lemons into lemonades.”

The first of many, with a career that began by proving himself a guitar player and singer, being the first person to start a conga line while beating the conga drum and eventually moving to Hollywood, stardom, and, of course, Lucille Ball.

Click for next Article
Previous article: Stevie Nicks Recalls Night She Almost Got Arrested With Prince
Next Post: Cameron Diaz Recreates Iconic Moment From ‘There’s Something About Mary’