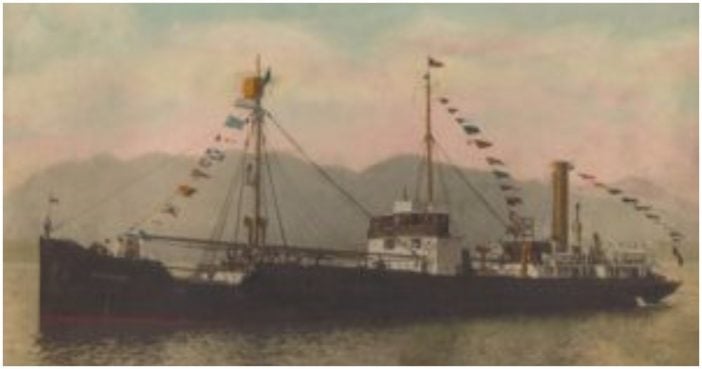 Tales of ghost ships haunting the open seas have been a staple of spooky storytelling for centuries. From the tales of the Mary Celeste to the Ourang Medan, these aren’t aren’t always reserved for the newest Pirates of the Caribbean film.

Enter the SS Baychimo, a 1,322-ton cargo ship launched in 1914, which eventually became known as one of the most infamous (supposed) ghost ships in history.

Initially launched in 1914, the SS Baychimo was a 1,322-ton cargo ship built in Gothenburg, Sweden, and was originally named the Ångermanelfven. Its main function was to shuttle goods between Hamburg and Sweden and back again.

In 1921, as part of Germany’s reparations for shipping losses stemming from World War I, the Ångermanelfven was transferred to the Hudson Bay Company in Great Britain. Soon after, it was renamed the SS Baychimo and shipped to Ardrossan, Scotland, for good.

Once there, the Baychimo shipped tea, weapons, sugar, and tobacco between Scotland and Canada during the summer months. From 1924 to 1931, it shipped fur and pelts around the world. On one fateful trip, however, the ship became trapped in an early season ice pack…

The crew members, then stranded and alone, hiked half a mile to Barrow, Alaska, to wait for the ice to break apart. A few short days later, they attempted to sail home, but became trapped again. This time, they had to be rescued and airlifted to safety. Several men stayed behind, however, seeking shelter in a nearby town. Their intention was to keep an eye on the Baychimo through winter and sail it back the following summer.

Page Page 1 of 3
Previous article: There Are Fifteen Birds Sitting On A Fence And You Shoot One. How Many Are Left?
Next Post: Jake LaMotta ‘Raging Bull’ Boxer Died At 95 … He Fought ‘Til the End