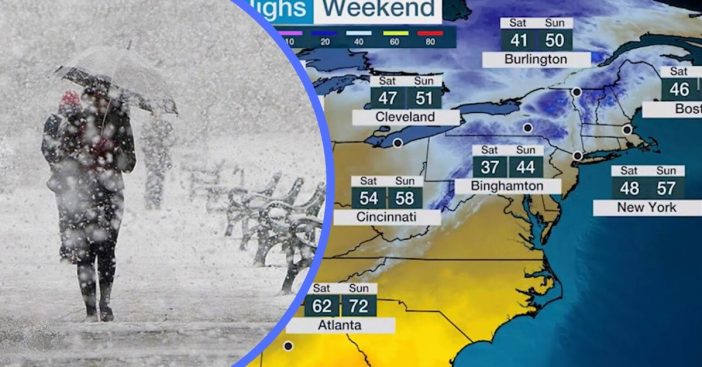 We were all patiently waiting for warmer weather to hit now that it’s May. However, there is some bad news for the northeast portion of the U.S. A historic May snowstorm is on its way to impact the northeast and mid-Atlantic regions this weekend. Additionally, many parts of these regions will experience record low temperatures that are rarely ever seen in the month of May.

Parts of northern New England can expect up to six inches of wet, heavy snow from Friday afternoon into Saturday. An inch of slushy snow may fall over places like Pennsylvania. Steady snow can be expected between Binghamton and Albany in New York, southern and central Vermont, New Hampshire, and Maine. The weight of this snow mixed in with the heavy winds may lead to power outages in some areas and even tree damage.

What and where to expect this historic May snowstorm

Here is our official snowfall forecast for Friday night into Saturday: pic.twitter.com/YBUZcSbKX3

Places with a high elevation such as Northern Georgia and areas in the Carolinas can expect frost with this storm. Temperatures anywhere between 10 and 25 degrees can be expected in some areas, which is colder than it was on Christmas Day for many U.S. states. For example, cities such as Detroit, Pittsburgh, and Indianapolis may see these record cold temps in the 20s. Additional cities experiencing record-low temps will be Boston, Providence, Rhode Island, and Hartford, Connecticut.

RELATED: Blizzard Warnings And Tornado Threats Have Been Issued On The First Day Of Spring

The snowstorm’s cold temps will extend down into the south as well, hitting Alabama and Mississippi. The Carolinas and Tennessee Valley can see lows in the 30s, which is unheard of for them this time of year.

The record low temperatures come from a system moving into the Northeast clashing with cold Arctic air, which is brought on by a polar vortex. Many of us are familiar with that term after experiencing a killer polar vortex that turned boiling hot water into ice upon throwing it into the air. Hopefully, after this weekend moves along, we can expect warmer air!