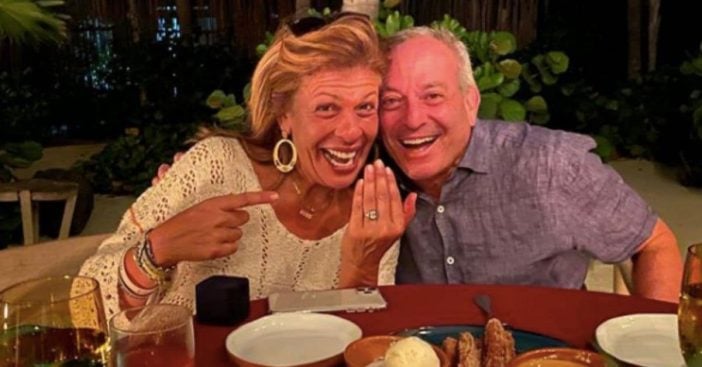 The coronavirus pandemic has put a damper on a lot of things, including upcoming weddings. While many couples have managed to work it out in some innovative way, some couples have decided to postpone their wedding until this is all over. Hoda Kotb is one of the many affected by the pandemic as she and fiancé, Joel Schiffman, are trying to figure out their own wedding plans.

“We’re figuring it out,” Hoda tells Jenna Bush-Hager this week virtually on Today. “I think it’s one of those things that you spend a lot of time planning it and putting money down on venues — I’m imagining everybody’s been doing that. June is, like, the wedding month,” she says.

Hoda continues, “I actually know Kathie Lee (Gifford)’s daughter (Cassidy Gifford) had to postpone hers. She sent out a save the date and then she sent a wedding invite, and then she just sent an email saying actually it’s going to have to be delayed until the fall,” said Hoda, adding, “I think a lot of people are finding themselves in that position. … I think it’s tough emotionally, financially, everything.”

RELATED: Couple’s Wedding Canceled Due To Coronavirus, So They Got Married At Drive-In Theater

Hoda actually revealed to People last month that she and Joel would likely postpone their wedding. They planned to have a beach ceremony. “We are literally about to push the button on the save the dates just because … we kind of have our reservations, we know what we want to do, but who’s to know if it’s going to need to be delayed? So Joel and I have been discussing it,” she shares.

The Today host does say that postponing her wedding is like “small potatoes” compared to what others have been facing. “My friend was telling me that she was at a Zoom funeral the other day, and I almost died inside. I was like, ‘Oh, my God,'” she shares. “So if you’re planning a celebration, and you’re wondering when it should be, just be lucky you have a celebration to plan.”

She “already feels married” to Joel, so saying “I do” at this point is just a “formality,” she says. The two began dating back in 2013 after meeting at a Wall Street event. He proposed to her during their vacation in Mexico last November.