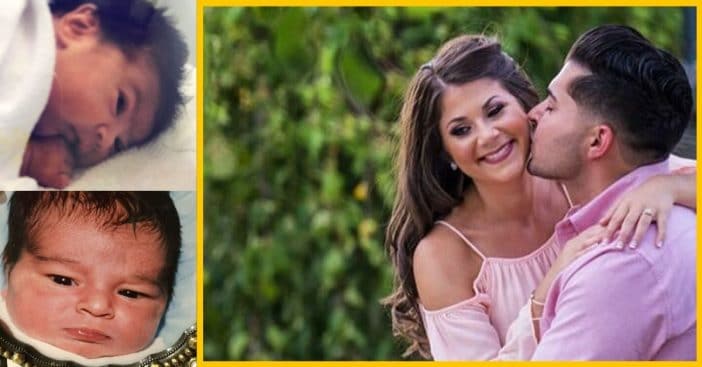 Some things are just meant to be. Jessica Gomes and Aaron Bairos were born at Morton Hospital in Taunton, Massachusetts. That’s remarkable enough, but the similarities don’t stop there. They share a birthday, which is Saturday, April 28, 1990. At first, they parted ways after sharing this experience at the hospital. But, 27 years later, they crossed paths again in an incredible way.

“From the start, we both knew we were right for each other,” Gomes told People in 2017. They had not seen each other – in a way they could remember – for decades. But friends at Taunton, Massachusetts high schools introduced them and they felt a connection immediately. Ultimately, they solidified their many connections with marriage.

Both went to rivaling high schools, both felt a connection, and both were born at the same hospital. 2007 marked the first time they met in a way they could remember. Mutual friends introduced them and soon after they found themselves dating. Immediately, Gomes knew he was special, though for different reasons besides their unknown connection.

“I knew from the very beginning that he was different—he was respectful, and he made me laugh,” she explained in 2017. “He still makes me laugh! No one else can do that.” But there was something else exceptional the two realized with time. First, early on, they became aware of sharing a birthday – and year. But then they also shared the same hospital. Initially, Gomes didn’t buy it. “I didn’t believe him at first when he told me he had the same birthday, it was crazy, I thought he was trying to pull a smooth one and win me over,” she admitted. But both did their homework.

These two were simply meant to be together

Circumstances put Gomes and Bairos together from day one. And, fortunately, Gomes’ grandmother saved a newspaper clipping marking the day. There, in clear blank ink, sat proof of the remarkable circumstances behind their birth. Not only did the clip read their names, but it only read their names. No other babies had been born that day. All these bizarre circumstances mean that, according to Gomes, “Every birthday is a big running joke in the family, and we always celebrate every year with them and our group of friends.”

And there will be a lot more time for jokes between these days. Bairos proposed to Gomes during a walk through the Boston Public Garden. On September 9 at Holy Family Church, Gomes marked the fifth generation of family members to wed there. “We’re still getting ready for the married life, but it’s been awesome so far,” she explained after the happy occasion. They hope others might get some happiness from their amazing tale too, as she added, “But we hope our story can bring a smile to people’s faces because that’s what the world needs right now.”