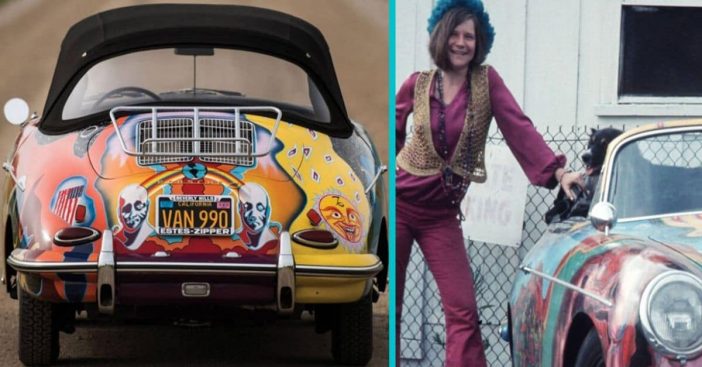 The Porsche 356 Cabrio is an elusive treasure. There are only so many of these vehicles in existence, which makes it so desired. But if you add on an intriguing past and unique coat of paint, it becomes even more valuable. As a result, Janis Joplin’s 1964 Porsche 356 netted $1.76 million at an auction in 2015. The car is decked out in a design Joplin referred to as “The History of the Universe.” A lot of factors about this car added up to make it worth a lot of money.

The auction in question was RM Sotheby’s “Driven by Disruption” sale based in New York City. Even among car fans, this vehicle stands unique. Its selling price was remarkably high and deservedly so, given its unique detailing and history. What earns a car this much at auction?

Initially, Janis Joplin’s Porsche 356 looked very different from what we see now. Indeed, the car that sold at the auction is a lot more flashy and interesting than it used to be. When Joplin bought it, the car was a simple, uniform, gray color. According to Autoweek, Joplin gave this stormy blank canvas to a “roadie” of hers, Dave Richards. She reportedly supplied him with $500 to spice the car up with a new decorating job. He certainly did just that.

That $500 adds together with the $3,500 Janis Joplin bought the Porsche 356 for through Beverly Hills dealer Estes-Zipper. $4000 later, and Joplin had a reliable, one-of-a-kind vehicle. Richards did fine, elaborate work on the car, and his painting choices held a lot of meaning. It features Joplin’s astrological sign of Capricorn. “The Eye of God” gazes out from the hood while the California valley stretches across the right door. It features portraits of members of Big Brother and the Holding Company. All these new elements sit over a Candy Apple Red base. Clearcoat protects everything from the elements, lest the psychedelic richness fade.

This car actually saw some use

Some artists might use an iconic vehicle for certain occasions or leave them aside, unused. Residents of San Francisco actually got to see Joplin using her Porsche as her daily driver. She kept up the routine even when Big Brother, immortalized together on her car, broke up, so residents saw her with it at the end of the ’60s and beyond.

Though it was sold at auction in 2015, it actually briefly changed owners through less legal means. Yes, this unique car was stolen. But all that work done on it gave the original owner an advantage. The thief tried to cover up the colorful paint, but the job was never fully completed. And when the car was retrieved, the thief’s work came off with relative ease thanks to the clearcoat. Richards managed to avoid doing damage to the original artwork underneath. The iconic car went through a few more transformations over the years after Joplin’s death, but after some dedicated work, it’s looking back to how it was years ago.

RELATED: Take A Look At This Gorgeous Volkswagen Bug Made Out Of 2 Million Glass Beads