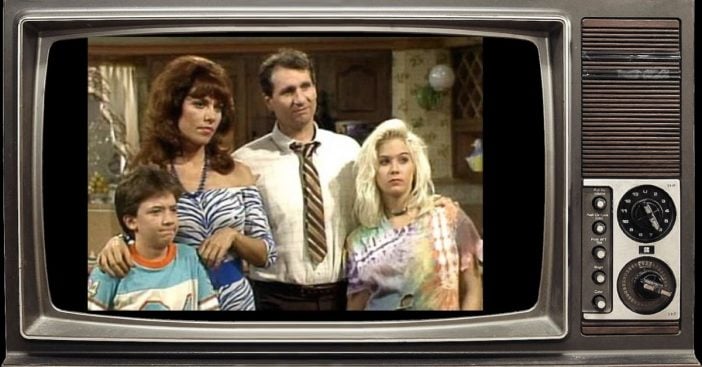 This month, popular sitcom Married…with Children turns 33. It first aired on April 5, 1987. It ran for a little over ten years to June 1997 to great success. Americans followed the lives of the Bundy family and those around them. Like most shows, things evolved as the episodes went on. So, it’s quite a nostalgic trip down memory lane to watch the premiere, which is posted in full on Vimeo.

Running at just under 23 minutes, the premiere set up everything we know and love about Married…with Children. It also lets viewers remember the cast members from years ago. Modern viewers are familiar with Ed O’Neill on Modern Family. But for many people, this is where he got a big start. Or, at least, this premiere is how he became such a household name.

In total, Married…with Children lasted for 11 seasons. During that time, it aired 258 episodes. It starred Ed O’Neill as Al Bundy, patriarch of the Bundy clan. Katey Sagal played his nagging wife Peggy Bundy, née Wanker. Christina Applegate and David Faustino played the the Bundy children, each dysfunctional and fun in their own right. One can be ditsy but fiercely protective and the other tries to be cool Grandmaster B.

But things did not start off this way officially. The pilot had a different cast, particularly with the children. Initially, Tina Caspary filled the role of the Bundy daughter Kelly and Hunter Carson played Bud, their son. But O’Neill stated he did not feel an important connection between the original cast. Without that chemistry, the family would never have felt natural, so by the time the show aired publicly, it went through a cast change. That’s how we ended up with the particular cast we know so well.

The premiere established a lot of firsts

Season one, including the pilot, established a lot about the family and world they inhabit. Some precedents changed over the years, though. For one thing, the dynamics between Al and Peggy are pretty consistent but the first season shows them probably the most intimate. Other times, they’re rather dysfunctional to one another.

It also raises the unreasonable expectation of seeing Peggy actually doing housework. Yes, these were times when roles like that did not have to go to the woman of the house, but she basically outright refused to. Instead, she wiled away the time watching daytime talk shows and the like. Though, it should be noted, she’s not the best at it when she does clean anyway. But when not watching sad attempts at cleaning, viewers can also meet the neighbors in this important premiere. The show introduces Steve and Marcy Rhoades, who enrich the world the Bundy family inhabits, and establishes some backstory for the characters. This, ultimately, goes a long way to explaining where the older characters are coming from. When it’s time to enjoy some old favorites, why not revisit where it all began with this pilot in the same month when it first aired years ago?