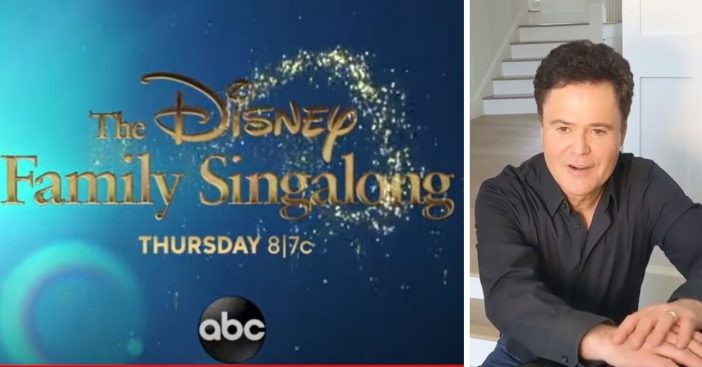 Tonight, ABC is airing a special called The Disney Family Singalong! It will feature many celebrities performing Disney classics from their homes, including Donny Osmond. The special will be hosted by Ryan Seacrest and airs tonight, Thursday, April 16, 2020, at 8 p.m. ET on ABC. It will be a one-hour special.

This special is something happy to look forward to for kids and adults alike during the coronavirus outbreak. As celebrities sing Disney songs, an animated character will guide on-screen lyrics, so you can sing along with your family!

RELATED: Some Of The Best And Nostalgic Movies On Disney+ Right Now

Here’s a list of the performances that will air tonight (not sure if these will air in this order):

“Be Our Guest” – Derek Hough and Hayley Erbert, with a special appearance by Julianne Hough

“Can You Feel the Love Tonight” – Christina Aguilera

“Colors of the Wind” – Tori Kelly

“Do You Want to Build a Snowman” – Thomas Rhett

“Under The Sea” – Jordan Fisher

“You’ve Got a Friend In Me” – Josh Groban

I can’t wait to watch! Watch the promo below: