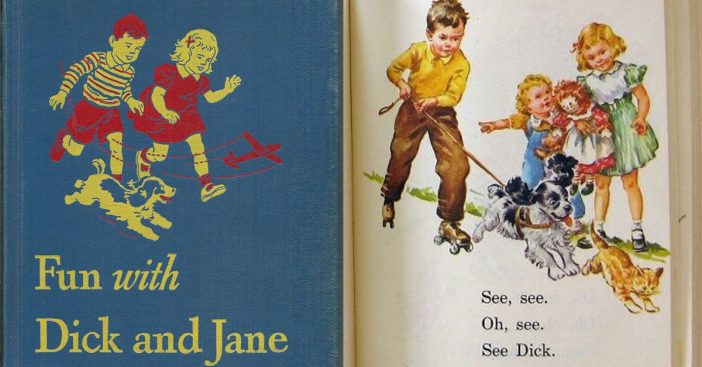 Dick and Jane books became a lot of people’s first book they read themselves. And even before that, educators leaned on these books and helped students work through them. They became so popular for a simple reason: they were just the books kids and teachers needed. They came at a time when America still had to figure out education and school structures. Teaching methods present in Dick and Jane books had a ripple effect across a student’s entire educational career.

But how did they come about? Actually, Dick and Jane books were pretty revolutionary for their time. They also helped revolutionize education as a whole. History and culture dictated what made them so unique and they, in turn, addressed contemporary teaching issues. Now, they’re nostalgic mementos.

Early on, schoolhouses included only one big room for all students to congregate in. With this layout, it was impossible to separate students by their abilities or rank. Additionally, books were in short supply even for classrooms. As a result, students had to bring books in from home while teachers used phonics. Phonics was, at the time, the most adaptable teaching method available to them for all reading levels. Most reading material involved the Bible exclusively, limiting what students could read and relate to. All the while, teachers taught them to look at each cluster of letters individually instead of each word as a whole.

RELATED: Why We All Learned To Play The Recorder

Enter William S. Gray and Zerna Sharp. They brought their educational backgrounds and zeal into the world of developing reading primers. As opposed to the phonics teaching method, Gray and Sharp became supporters of the “whole word” method. Rather than sounding out each letter or small cluster, readers were encouraged to learn the word as a whole. To spread this method, they published the Dick and Jane books as part of the Elson-Gray reader.

Books for all classrooms and students

Finally, all American classrooms had primers and readers for students at all levels. The advent of Dick and Jane books came about in the 1940s but by the next decade, America Comes Alive writes that up to 80% of classrooms had these readers. These books brought a lot to the table for all parties involved: students and teachers.

In addition to teaching students how to read, both Dick and Jane had good moral standings. Each did their chores, helped others, and acted with kindness. Furthermore, they inhabited a neighborhood that children could see as their own. Images definitely played a part as well, but teachers also had helpful tools to keep themselves engaged. Books had special outlines and cards, guiding lessons in a productive way. Eventually, opinions about teaching changed once again and skeptics targeted the whole word method. But they are eternally regarded as nostalgic collectors’ items that got a re-release in 2003 simply to help people relieve earlier days. Did you learn with these primers?

Previous article: Were You Stabbed By A Pencil And Still Have A Mark? You’re Not Alone
Next Post: People Buy Stamps To Try To Stop US Postal Service From Going Bankrupt