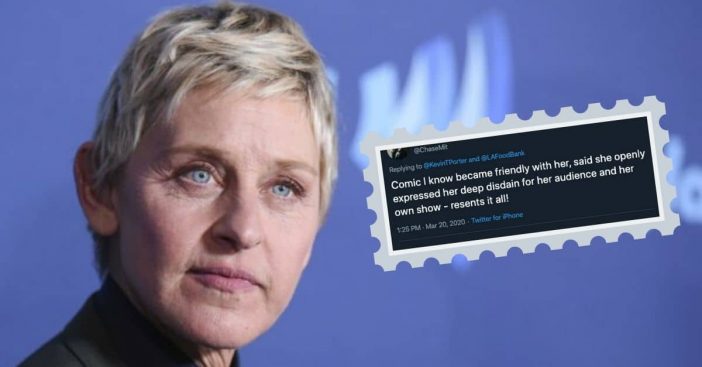 Ellen Degeneres is one of the most well-known talk show hosts on primetime TV. She always ends her segments by telling her audience to “be kind,” but is she practicing what she preaches? People online say others. Kevin T. Porter is a comedian who took to social media to slam Degeneres for not being as nice as she claims to be.

“Right now we all need a little kindness,” Porter wrote on Twitter recently. “You know, like Ellen Degeneres always talks about!” he writes. “She’s also notoriously one of the meanest people alive.
Respond to this with the most insane stories you’ve heard about Ellen being mean & I’ll match every one w/ $2 to @LAFoodBank”

Is Ellen Degeneres actually as mean as people say she is?

Right now we all need a little kindness. You know, like Ellen Degeneres always talks about! 😊❤️

She’s also notoriously one of the meanest people alive

This prompted people across the Internet to begin sharing their not-so-pleasant experiences with the talk show host. A former staff member of the show recalls, “I worked for her show for a couple years on the digital team. I’m afraid I have no stories of negative interactions with her on account of we weren’t allowed to talk to or in any way interact with her.”

A former server recalls, “I worked @RealFoodDaily, served her & Porsha at brunch. She wrote a letter to the owner & complained about my chipped nail polish (not that it was on her plate but just that it was on my hand). I had worked till closing the night before & this was next morn, almost got me fired.”

Apparently working on Ellen’s show is no fun either

Another tweets out, “Worked at her favorite 3 Michelin star restaurant in college (dinner bills 5k + regularly). REFUSES TO TIP. One time staff stayed 4 hours past closing for her.” Some others didn’t need a personal interaction/experience with Degeneres to claim that she’s not a nice person. “Ellen scares people??? With the things they are notoriously afraid of????? Everyday???? On live TV????” someone writes.

Writer and comedian Benjamin Siemon also has a story. “She has a ‘sensitive nose’ so everyone must chew gum from a bowl outside her office before talking to her and if she thinks you smell that day you have to go home and shower,” he claims.

Comic I know became friendly with her, said she openly expressed her deep disdain for her audience and her own show – resents it all!

One person actually heard of a Degeneres story from working on another show. “When I was working on @midnight, our stage manager (coolest mf’er I’ve ever worked with) told us to never work for Ellen. He told us she has signs up in her office that say ‘Do not look the host in the eye.'” What?!

As a result of all the stories, Porter ended up donating $600 to the LA Food Bank. “If you can, please give to your local food banks because they are slammed right now,” he says in a tweet, then follows up with more shade towards Degeneres. “… honestly, be kind, especially to those in the most vulnerable positions right now. But be TRULY kind. Don’t settle for a cheap imitation.” Ouch.

Previous article: John Callahan, Best Known For ‘All My Children’ Dies At 66
Next Post: How Lionel Richie And Kenny Rogers Became The Best Of Friends