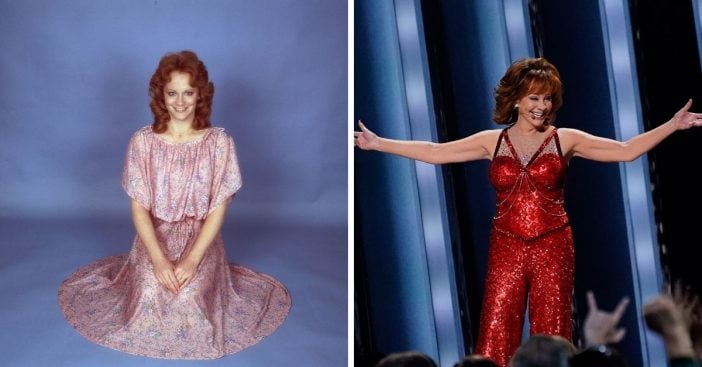 Reba McEntire has many talents. Of course, she is an incredible country singer. She is also an actress who had her own show called Reba in the early 2000s. These days, she still sings, has a busy career, and recently guest-starred on the sitcom Young Sheldon.

Reba’s career started in the mid-’70s. She sang “The Star-Spangled Banner” at a National Finals Rodeo on Oklahoma City. One of the attendees was songwriter Red Steagall who helped get her country music career going. Now, she’s won a plethora of awards. Let’s take a walk down memory lane to see fun photos of Reba in each decade, starting with the ’70s when her career began:

This is right when Reba’s career began! This was likely one of her first big photoshoots, with People Magazine. She has always had her signature red hair, but look at the style… very ’70s!

In the ’80s, Reba became even more popular. She won an award at the 20th Annual Academy of Country Music Awards. Her outfit looks like a true country star and her hair got a little bit shorter and curlier!

Here is a photo of Reba performing in the ’90s. She looks stunning in an almost-all black outfit and her hair is slightly longer. Have you ever seen Reba perform live?

In 2001, Reba got her own sitcom called Reba. She played a single mother trying to keep her family afloat. She was often very sarcastic but had a great heart. Did you enjoy the show? It ended in 2007.

She continued to release new music and went on a tour. She also starred in her second show called Malibu Country, which lasted about 18 episodes.

Last year, Reba released her twenty-ninth studio album called “Stronger Than the Truth.” She also recently appeared on the sitcom Young Sheldon. She was also set to go on a tour and perform in Vegas with Brooks & Dunn, but they were canceled due to the coronavirus outbreak.

She recently performed at the Grand Ole Opry for the 4th of July, one of her first live performances following the coronavirus pandemic. We can’t wait to see what Reba will do next!

Below is her video for one of my FAVORITES!! 🙂