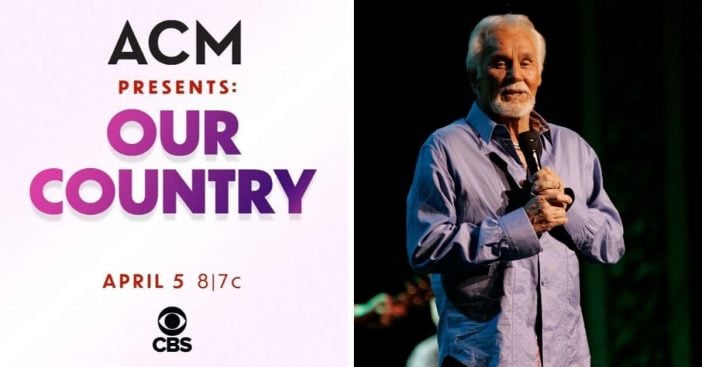 The 55th Academy of Country Music Awards (ACM Awards) were supposed to air on Sunday, April 5, 2020. However, due to the coronavirus outbreak, the award show has been postponed for now. But, the makers of the award show have something else up their sleeves. They will hold a virtual concert called ACM Presents: Our Country.

During the two-hour event, the late Kenny Rogers will be honored. The star passed away on March 20. During the show, many country artists will perform from their own homes. The artists will also share some clips of their favorite ACM Award moments of the past.

Country artists will perform virtually at ACM Presents: Our Country and honor the late Kenny Rogers during the show

It has been reported that Luke Bryan, Darius Rucker, and Brad Paisley will honor Kenny Rogers with an acoustic tribute of some of his hit songs. Kenny won 10 ACM Awards during his long career. The special will air on Sunday, April 5 at 8/7c on CBS.

In addition, they have rescheduled the regular award show to Wednesday, September 16, 2020, at 8/7c on CBS.

Click for next Article
Previous article: ‘Duck Dynasty’ Star Sadie Robertson Is Helping Disappointed Brides During Coronavirus Pandemic
Next Post: Social Security Benefits Will Not Be Impacted By The Coronavirus Outbreak