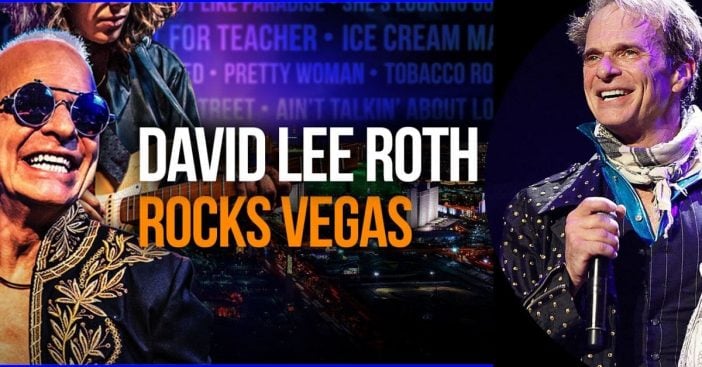 On March 15, David Lee Roth announced the postponement of the House of Blues Las Vegas show. The reason, like so many other changes in everyone’s schedule, traces back to COVID-19, otherwise known as the coronavirus. Though not always deadly, it has been fatal to many individuals who are older or immunocompromised. Recent research also shows that young adults can also require hospitalization.

To safeguard the health of fans of all ages, David Lee Roth announced that the shows have been postponed “until further notice.” That came from the official statement. Roth’s announcement on Twitter came with a stab at humor we might all need to emulate as we navigate this uncertain period.

“Somebody get me a Doctor…”

And now a word from Dave

“Somebody get me a Doctor, just kidding..

Take your Whiskey home, not kidding..”

Roth’s tweet went live on March 15. It began straightforward enough, briefly giving the unfortunate but understandable news about the show. “@HOBLasVegas postponed,” it read. The tweet continued, “And now a word from Dave […] ‘Somebody get me a Doctor, just kidding..Take your Whiskey home, not kidding..'”

RELATED: David Lee Roth Once Crashed A Bachelor Party, Learn What Happened Next

Fans immediately caught on to the song reference. His wording is derived from “Take Your Whiskey Home,” a celebrated Van Halen song. One person wrote, verbatim, “Take your whiskey home, there’s not another song like it in the history of rock, man what a classic, that song never gets old !” Meanwhile, another user replied with another reference, “I Don’t Wanna Hear About It Later….” The comment ended with a rocking hand symbol.

David Lee Roth’s show is postponed, but he gave fans just the distraction they needed

Though it was a simple tie-in, referencing that song was a welcome distraction to lighten the mood, even set beside the initially distracting words of “Somebody get me a Doctor.” Naturally, as a renowned Van Halen member, he would turn to a classic to get people excited about music again.

Distractions like these are simple but effective ways to spread some cheer, even in the face of COVID-19 and all its effects on society. The official statement from the House of Blues Las Vegas shows cites “an abundance of caution” for the delays. The March 18, 20, 21,25, 27, and 28 shows have been “postponed until further notice.” However, the statement goes on. “Hang on to your tickets, we’ll email you (and post updates here) as soon as new dates are announced.”