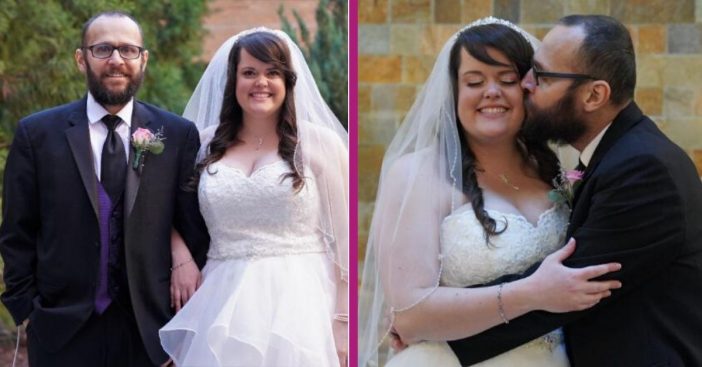 A hospital in Delaware has gone above and beyond for one of its terminally ill patients by organizing a wedding for him and his fiancée. Back in August 2019, doctors found a small lump in Gus Jiménez’s lung. He was soon diagnosed with NUT carcinoma, which is a rare and rapidly growing cancer that cannot be cured. “Everything kind of changed in August,” Rachel Jiménez says.

On January 31st of this year, Gus was rushed to the hospital and was admitted for dehydration. “His pain progressed, and he has been in the hospital since that day,” says Megan McGuriman, a spokeswoman for ChristianaCare. Knowing that he might never return home, Gus proposed to his then-girlfriend, Rachel, from his hospital bed.

Gus and Rachel Jiménez say “I do”

“We kind of just talked about, ‘Why would we get married if we know this potentially could lead to him not being here much longer?’ and I said I didn’t care about that,” Rachel says. It was just a week later when the two would find themselves at the altar in the Wilmington Hospital atrium.

“Our caregivers helped decorate the atrium with flowers, brought the wedding cake and cupcakes and set up seating for guests,” McGuriman recalls. Many attended to help the two celebrate their very special day.

Everyone came forth to make sure the day was perfect

Men’s Wearhouse and David’s Bridal even put forth donations to ensure that Gus and Rachel had the best tuxedo and wedding dress. A photographer also volunteered their time to take pictures. “The perfect definition is ‘just bittersweet,'” Rachel says about the occasion. “We’re still on cloud nine.”

She continues, “We’re still living in the moment, and that’s basically what we’re doing every day. I still want to be his wife no matter what.” Wishing well to both Gus and Rachel on their marriage and overall health.